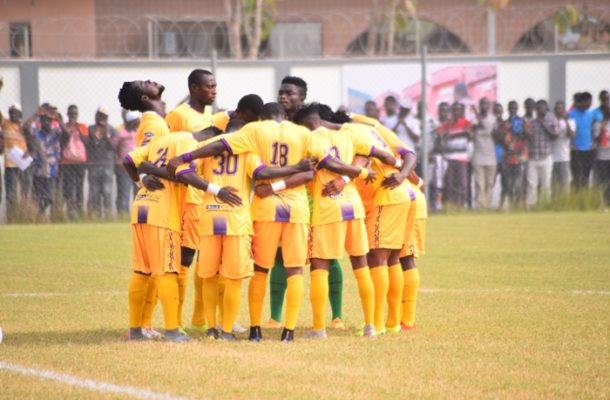 Medeama SC defeated rivals Karela United 2-0 at the Akoon Park in Tarkwa on Monday morning after Sunday's fixture was rained off when the scores was 0-0.

The two sides played for 70 minutes with none of the teams able to break the deadlock on Sunday before the heavy downpour resulted in the match being shelved for Monday.

They started the game from the 70 minute meaning they played only 20 minutes of the game as the home side managed to win by 2-0.

Medeama scored the two goals within 15 minutes of the game which lasted for just 20 minutes.

Justice Blay who has been injured for the past eight months after sustaining an injury against Legon Cities last season was handed a rare start and he scored the opener two minutes into the 20 minutes game.

Youngster Kofi Ansu Patrick who joined the club the season from Berekum Arsenal made the game safe as he tapped home the second to make 2-0 which is his first goal for his new club.

It is the first win for the Tarkwa based side the season after struggling under former coach Ignatius Osei-Fosu who was sacked not long ago.

The mauve and yellows have appointed Umar Abdul Rabi as the interim coach following the sacking of the former Eleven Wonders gaffer.

Medeama have now departed the relegation zone with the win.