GPL: Toothless Hearts of Oak spare the blushes of below par Kotoko 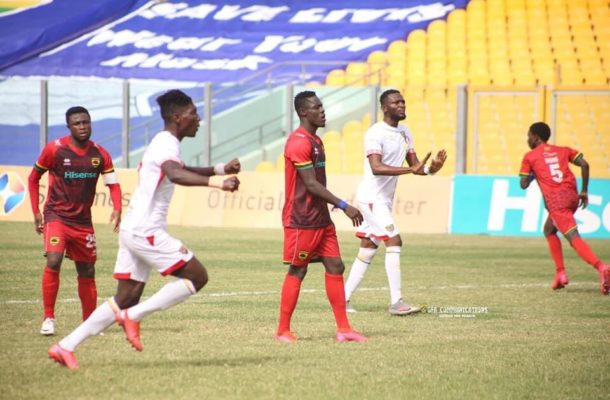 It was a game of penalty kicks and wasted chances from both sides as on another day it could have ended 1-1 at least had each side scored their penalty kicks.

Under a minute Kumasi Asante Kotoko were awarded a penalty kick but the chance was missed by top scorer Kwame Opoku as goalkeeper Richard Attah stretched to his elastic limit to save the ball.

After that save he had to be attended t0 by the club's medics as he over stretched but was okay to continue the game.

Hearts of Oak took total control of the game and had successive chances to have taken the lead in the game but for their profligacy upfront.

Patrick Razak missed an absolute sitter when one on one with Kotoko goalie Razak Abalora as he could only hit the goal post.

Kojo Obeng Jnr missed another glorious chance for Hearts after being gifted the ball in the Kotoko penalty box one of several good chances he squandered.

It was all Hearts of Oak in the first half but one Kotoko move involving Fabio Gama, Emmanuel Sarkodie Naby Keita resulted in the Guinean squandering a good cut back.

The second half started in a similar fashion with Hearts of Oak dominating possession and creating all the chances but were unable to convert.

Hearts were awarded a penalty after Patrick Razak was fouled in the box but Isaac Mensah's tame kick was saved by Abalora who committed the foul.

Both teams were unable to score as the game ended goalless.