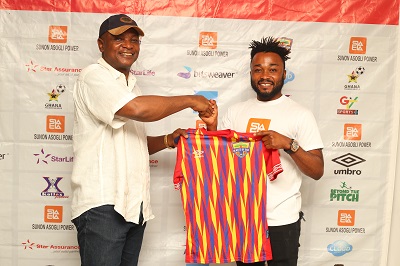 General Manager for Ghana Premier League side Accra Great Olympics, Oluboi Commodore says that his outfit have reported Accra Hearts of Oak to the Player Status Committee for breach of contract in the transfer of Gladson Awako to them.

He says that per the terms of agreement the Ghana Premier League champions are supposed to pay for the player's transfer fee in two installments.

He says the club have defaulted in their payment therefore breaching the terms of their agreement hence Gladson Awako must now return to Great Olympics.

Speaking in an interview with  Kumasi based Fox FM, he stated that Hearts of Oak have failed to respond to their letter about Awako returning to them hence their decision to head to the Status Committee.

"We are writing to the status committee today for strict enforcement of the agreement between Olympics and Hearts on Gladson Awako.We are demanding the return of the player."

"We wrote to Hearts of Oak to release the player back to Olympics for violating the agreement of the contract but they are yet to respond to us.

Hearts of Oak have no regard for us,we expected them to come to us for an amicable settlement."

The 31-year-old Awako, who has been at the heart of the transfer controversy between the two clubs, has confided in close friends that he was no longer interested in playing for Hearts without reason.