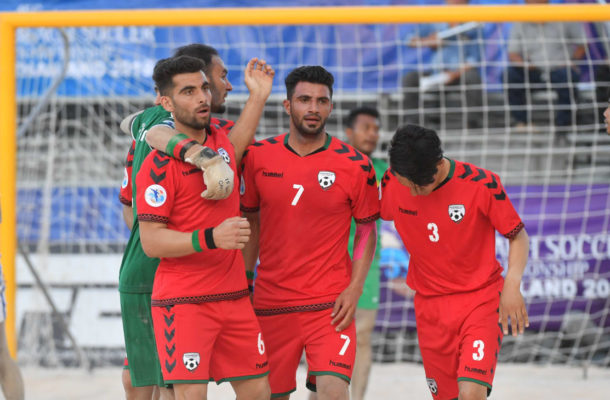 Pattaya: Afghanistan made a positive start to the AFC Beach Soccer Championship Thailand 2019, emerging 3-2 extra-time winners against Malaysia in a highly competitive opening Group A match.


Afghanistan captain Sami Ullah Mohammadi scored in the opening seconds of extra-time to seal their eventual success, which gives them two competition points,

Looking to atone for their loss to the same opponents in the opening match of the 2017 tournament, Malaysia asked plenty of questions of Shabab Shah Alavi in the early stages, forcing the Afghanistan goalkeeper into numerous early interventions.

Mohd Hasrol seemed to warn of an impending Malaysian goal when he hammered a free-kick into the crossbar, but Rauf Qaderi made sure Afghanistan would finish the period ahead, turning and scoring with a low-trajectory effort with six seconds left before the break.

Mohd Riduan became the second Malaysian player to be denied by woodwork when he clipped the crossbar early in the second period, and the Southeast Asians were level when goalkeeper Mohd Nazri Sulaiman struck a gorgeous long-range volley into the top corner in the 22nd minute to make it 1-1 at the end of the second period.

Having made a number of saves, Afghanistan's Alavi scored in similar fashion to put his side back in front in the first minute of the final period, a matter of seconds after Malaysia's Muhammad Qushairie had continued the trend of hitting the crossbar.

But Qushairie refused to be denied, powering his side back into contention, and taking the contest into extra-time, when he netted a terrific effort from distance with four minutes remaining.

Afghanistan wasted no time in using the extra period to decide the match, scoring what would prove to be the killer blow direct from the kick off through Mohammadi

Their next test comes in the shape of Palestine on Saturday, while Malaysia are set for an all-ASEAN affair with host nation Thailand.
Meysam Ashtyani, Afghanistan head coach

"Any first game of a tournament is difficult, and we didn't have a good situation for our preparation, but we tried and we had a target to come here and win the game, and we were able to take the points. Congratulations to all the people of Afghanistan for this win."

"Both teams made mistakes, but when Malaysia made mistakes and they happened to be goals for Afghanistan. We couldn't score from our chances, now we have to hope we can improve when we play against Thailand."Source: the-afc.com