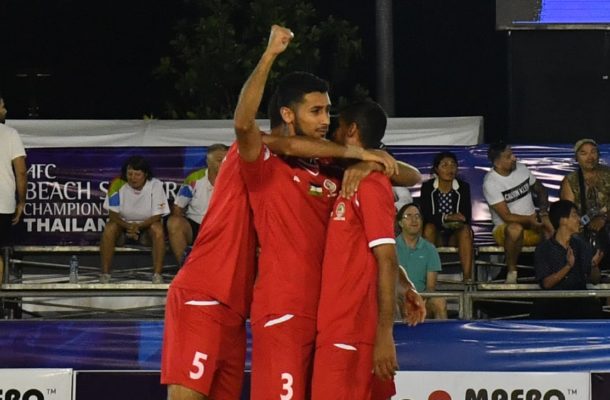 Pattaya: Palestine finished as Group A winners with a dramatic 6-5 win against Malaysia at the AFC Beach Soccer Championship Thailand 2019 on Monday.


A hat-trick from Maisara Al Bawwab proved crucial for the Palestinians, who took their group stage tally to a full nine points from three matches, while Malaysia also squeezed through to the last eight thanks to Thailand's later 2-0 win over Afghanistan.

Mohammed Faizal So'od's charges advance due to their superior head-to-head record, with both they and Thailand finishing on three points.

Malaysia came into the match knowing three points would guarantee their place in the quarter-finals, but they got off to the worst possible start when Maisara Al Bawwab thundered a goal home straight from the kick-off.

Despite their nightmare opening, Malaysian salvation came around almost just as quickly, with in-form Ridhwan Zainal following up Iyad Abudiab's penalty save from Mohamad Norazman to make it 1-1 in the second minute.

Four minutes later Malaysia were in front, with Zaharim Yusof's bouncing long range effort beating Abudiab, and the Southeast Asians remained on the offensive for much of the first period to take a 2-1 lead into the first interval.

The start of the second period was one of the most action packed sequences of the competition so far, with the teams sharing five goals in eight minutes of non-stop action.

Mahmoud Al Neirab brought Palestine level once again when he powered home a free-kick from half way in the 16th minute, but another free-kick from similar range, this time from Qushairie Asaari, restored Malaysia's lead a minute later.

Al Neirab earned the applause of all in attendance when scored a bicycle kick of outstanding quality in the 19th minute, but Zaharim ensured history repeated itself when he volleyed home after a corner kick, once again just a minute after Palestine had scored.

Ahmed Allulahi saw a penalty saved by Malaysia's Nazri Sulaiman just seconds later, but Al Bawwab quickly scored a header to continue the goal rush and set up an exciting finish with the sides locked at 4-4 with one period remaining.

Al Bawwab repeated his spectacular trick of scoring from the kick-off with another beauty to complete his hat-trick and open the final period, but the third stanza was more tense that the free-wheeling second.

Nazri clipped the crossbar with a long range effort in the 33rd minute, but Palestine's Islam Abuobayda created some breathing space when he scored with a header just seconds later.

Malaysia found a lifeline when Yousef Shaladan sliced the ball into his own net with just a minute on the clock, but Palestine held on to seal a quarter-final meeting with Lebanon on Thursday.

"We entered the game afraid of yellow cards because of the quarter-final tie. Unfortunately, one of our key players received a yellow card, so we withdrew two other players in order to avoid the same conclusion. We gave our maximum performance while trying to avoid yellow cards."

"It's a very tough game of course. Palestine players were very tall and we had a disadvantage because of our players' size. Because of that, the throws from the goalkeeper for headers from Palestine players made it easier for them. We played our best game of the tournament. We treated it like a final game and that is what it looked like."