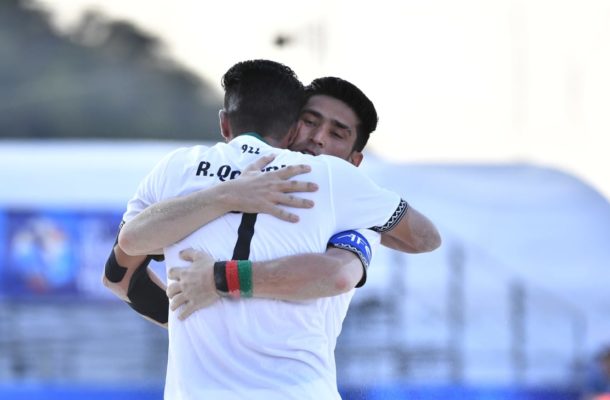 Pattaya: Palestine emerged from a highly competitive AFC Beach Soccer Championship Thailand 2019 clash against Afghanistan as the first Group A team to advance to the quarter-finals after earning a narrow 3-2 win on Saturday.


A late free-kick from Mahmoud Al Neirab completed a superb late turnaround for Imadeldeen Hashim's side, after a brace from Afghanistan captain Sami Mohammadi had them 2-1 down with just four minutes remaining.

With six points from two matches in the competition, Palestine are now safely through to the last eight regardless of their result against Malaysia in their final group stage on Monday, while Afghanistan must pick up points against Thailand.

The sides had both picked up points on the opening day of the tournament, and with a place in the quarter-finals now within reach, the opening period was evenly fought, and of high quality.

Afghanistan had a great chance to open the scoring when Zainuddin Sharifi stepped up to take a penalty after the ball struck a Palestinian hand, but Fadey Jaber came up with a brilliant bottom-corner save to deny him.

It looked very much like the sides would produce the first scoreless period of the tournament, but Afghanistan star and captain Sami Mohammadi broke the deadlock with a classy diving header to take the lead just 10 seconds before the first break.

Shots flew at each keeper with regularity, but it would take something special to produce the game's second goal, and it was Fadi Al Arawi who supplied the moment of magic, unleashing a simply sensational overhead volley to equalise for Palestine in the 20th minute.

The tense arm-wrestle continued, with both sides displaying full commitment to the cause as they went to the end of the second period still locked away at 1-1.

Rauf Qaderi hit the post with a superbly inventive 28th-minute back-heel on the volley, then popped up again a minute later to tee up Mohammadi, and the 2016 Asian Beach Games top scorer made no mistake, slamming the ball past Jaber to make it 2-1 to Afghanistan.

Palestine were minutes away from defeat, but Mohammaed Hassan gave them a lifeline when he forced the ball home from close range to equalise in the 32nd minute, before Al Neirab dramatically sealed all three points when he drilled home a low free-kick with just over one minute remaining.
Imadeldeen Hasim, Palestine head coach

"I have studied this team and we know that the Afghanistan team are very good, and very strong, but I also knew we could win. We have shown the level of performance I expected from the team."