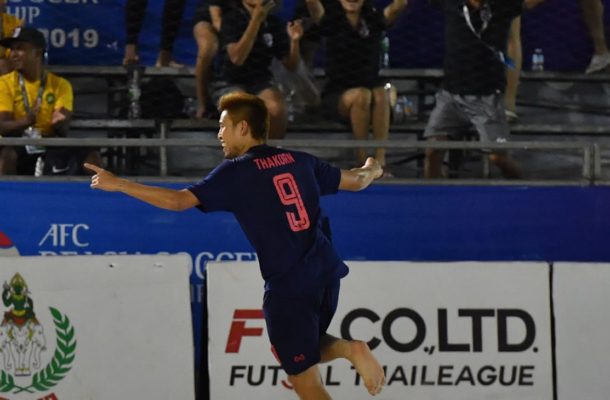 Pattaya: Thailand ended their 2019 AFC Beach Soccer Championship campaign on a positive note, and did a favour for their Southeast Asian neighbours Malaysia, by beating Afghanistan 2-0 in their final Group A match on Monday.


Goals from Thakorn Wikayaphan and Tanandon Praracha sealed the win for Abolfazl Khodabandehloo's team, who finished level with Malaysia on three points, but were unable to progress to the last eight by virtue of their inferior head-to-head record.

It was an opportunity missed for Afghanistan, who squandered the chance to reach the knockout stage to finish bottom of the group on two points.

Afghanistan began needing a win, even via penalty shootout, to reach the knockout stage ahead of Malaysia, but they had to contend with a Thailand side desperate to avoid finishing without a win on home soil.

The early result was a tense battle punctuated by committed defending, and the occasional moment of brilliance, like Boriboon Klanglar's full-stretch save to deny Zainuddin Sharifi's bullet-like shot, as the first period ended scoreless.

Thai captain Komkrit Nanan fired a bicycle kick just wide in the opening seconds of the second term, and the hosts finally broke the deadlock in the 16th minute, when Thakorn slammed a free-kick into the bottom corner.

Afghanistan were struggling to get anything going up front, with Thailand repelling attack after attack without much fuss, and launching several more dangerous runs of their own.

But for all their intent, Thailand were unable to add to their lead before the final break, sending a number of efforts off target to keep Afghanistan within striking distance at 1-0 down with one period of play remaining.

Afghanistan's entire campaign was at stake, and Qaderi came close with a header early in the period, but their task became more daunting when Tanandon lunged to knock a close-range second into the roof of the net with eight minutes remaining.

Time was running out for Meysam Ashtiyani's side, and the writing was on the wall for them when a chaotic goalmouth scramble failed to provide an equaliser with four minutes remaining, with a sand-covered Boriboon emerging with the ball after a string of Afghan attempts couldn't force the ball over the goal line.

Thailand were forced to navigate the last two minutes with four men after Wuttinan Pruethong was sent off, but Afghanistan remained unable to capitalise, leaving them to reflect on what might have been.

"Too little, too late. That means we came back too late. We should have played like that from the first game. Problem number one: before starting the tournament my two goalkeepers were called back by their clubs. I had one old goalkeeper and one new goalkeeper. My new goalkeeper was only in the game for three weeks. Problem number two: We are playing at home. We didn't cope with the pressure in the first game. Problem number three, very little beach soccer leagues in Asia. In my opinion we should be the top team in the group but we woke up too late. Congratulations to Malaysia and Palestine for going up. I'm really proud of my boys, but we only started to play after four and a half quarters in the tournament. We played four and a half out of nine."

"It was a very good game, Thailand came to play for honour, because they lost the first two games. I want to congratulate the coach of Thailand; their players were very good in this game. We had control of the game and for me the man of the match was Thailand's goalkeeper (Boriboon). We were a bit unlucky. We showed a very good level and we showed that, in the future, we can be one of the best in Asia and the world. I want to thank the people of Thailand who hosted us and allowed us to play in this event."