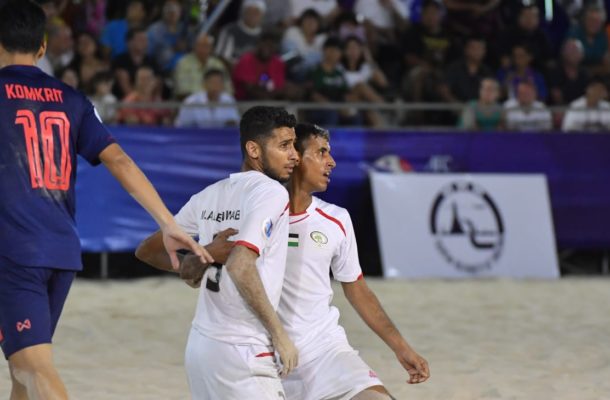 Pattaya: Palestine got their AFC Beach Soccer Championship 2019 campaign off to the best possible start, racing to the top of Group A with a 5-2 win over host nation Thailand on Thursday.


Four second-period goals paved the road to victory for Imadeldeen Hashim's side, who recovered from a slow start to take all three points on the opening night, with Mohammed Hassan scoring twice.

The match began immediately following a pyrotechnic Thailand 2019 opening ceremony, and the home side's Komkirt Nanan hinted at fireworks on the pitch when he sent a spectacular overhead kick inches above the crossbar two minutes in, but the teams largely cancelled each other out in the early stages.

A period of few scoring chances followed, but Thai captain Komkirt made good on his early promise when he fired his side into an 11th minute lead, ensuring they went to the first break with a slender advantage.

After chances began to flow more regularly for both sides, Palestine were able to level the tie when Hassan expertly headed home Mahmoud Al Neirab's pinpoint cross in the 17th minute, and then took the lead thanks a long range belter Alaa Atiya two minutes later.

Palestine had turned the game around in just two minutes, but Tanandon Praracha came up with an instant reply for Thailand, and the goals kept flowing when a super diving header from Maisara Al Bawwab and Hassan's close-range second put Palestine 4-2 up with one period of play remaining.

With Thailand under increasing pressure to force their way back into the game, the hosts probed for opportunities, but were largely rebuffed by calm Palestinian defending, and the occasional important save from Fady Jaber.

Palestine's victory was effectively set in stone when Thailand's Kittin Lorjanad turned the ball into his own net with three minutes remaining, as the West Asian side celebrated their return to the Continental stage with a memorable win.

Thailand must now aim to rekindle their knockout stage hopes in Saturday's Matchday Two clash against neighbours Malaysia, while Palestine will look for a repeat performance when they meet Lebanon.
Imadeldeen Hashim: Palestine head coach

"We respect the quality of this Thailand team and we had the some fear early in the game, but in the second half we turned it around. I feel that there are some special players in Thailand and we had to be aware of them."

"Today was a very hard game, It wasn't our day. We made a lot of mistakes and didn't play as we can. Maybe we were under pressure. They caught us on the wrong day. Sometimes whatever you do, it's not your day. Four out of their five goals were mistakes from our defenders. This is not the full capability of this Thailand team."