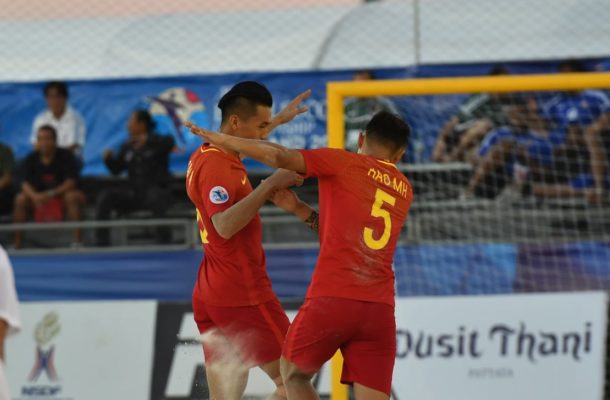 
Both sides had been eliminated from quarter-final contention two days prior, but a commanding performance which netted eight goals in the final two periods ensured China would leave the Land of Smiles with one of their own.

The result means Amarelle's men finish Group B in third place, while Kyrgyz Republic's first appearance in the competition ended in three defeats.

Kyrgyz Republic had a severely depleted playing list, with Bakyt Zhanaliev and two-goal scorer Kairat Duisheev both suspended and Baktiiar Orozaliev injured, while China PR had to contend with the absence of hobbling goalkeeper Han Yingnan.

Despite their lack of manpower, it was the Central Asians who took the lead, with Urmat Dusihenov catching Cai Weiming in possession before beating Guo Wei to score in the fifth minute.

Muktarbek Orozbakov's side would have gone further ahead if not for the intervention of Guo, who made multiple key saves, but China drew level in the final minute of the period when Han Xuegeng beat Maksim Maksimishkin with a low, hard penalty to make it 1-1 at the break.

Han continued his purple patch., putting Amarelle's side in front with a long range effort that slipped past an unsighted Maksimishkin in the 15th minute, before Hao Min Hui thumped a free-kick from distance againsr the crossbar a moment later.

The match started to get away from Kyrgyz Republic when Bai Fan struck home another Chinese goal in the 18th minute, and Liu Haoran made their task even more difficult when he headed home another one a minute later.

A spectacular falling volley from Erbol Almazbekov gave Kyrgyz Republic a lifeline, but it was quickly tossed aside by China, with Liu Yisi and Cai both scoring late to make it 6-2 with one period remaining.

Cai scored what was arguably the game's best goal when he rocketed home a magnificent volley in the 27th minute, and a dreadful miskick from Ermek Chabaliev allowed Liu Haoran to slam home an eighth Chinese goal, and Han completed his hat-trick when he punished another Kyrgyz error at the half-hour mark.

Almazbekov netted a late free-kick to complete his brace, but it was clearly China's day in the sun as they secured a win to remember to end their Thailand 2019 journey.
Ramiro Amarelle, China head coach

"I think we gave our best performance today, Obviously, it's the first time Kyrgyz Republic have played in the tournament, and they also have less players because of injuries and suspensions, and they suffered later in the match. It was an easy game after the second period but really we have to improve our level and increase our skills. We are happy because it was our first victory and also our last match. We wanted to give a victory for the players."

"From the beginning of this championship it was quite difficult for our team to play here and to acclimatise, but our team showed its best here. Today was our last match, and today we had a chance to win the match, but due to missing some strong players we were weaker, and the Chinese team was well prepared and well trained. Our participation in itself is a big achievement for our sport and our team."