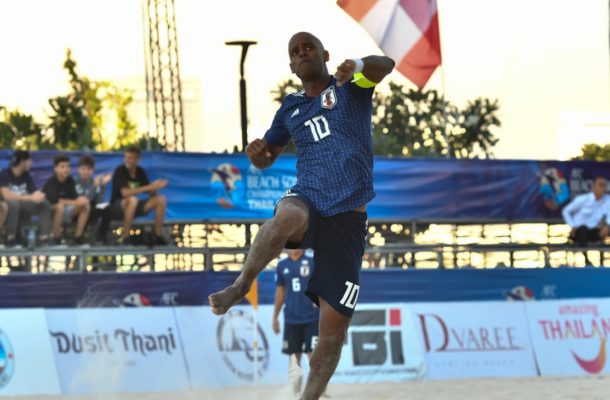 
Both sides had already sealed their places in the last eight prior to the match, but Japan's win means they will face the runners-up, rather than the winners of Group D, in Thursday's quarter-finals.

Ozu Moreira and Masanori Okuyama scored twice each, with Ozu joining teammate Shusei Yamuichi at the top of the tournament scoring charts with six goals in three matches.

Mohamed Ashoor was a notable absentee for Bahrain, with the suspended captain deputised by former football international Rashed Jamal, who found himself on the wrong end of the game's opening goal, when Ozu superbly skipped around the 40-year-old before firing low into the bottom corner on two minutes.

But, despite their fast start, Japan's lead was gone just as soon as it had arrived, with Ebrahim Al Mahjoob steering a pinpoint header across Shingo Terukina two minutes later to make it 1-1.

An excellent reflex stop from Sayed Mohamed Abbas denied Takaya Akaguma with two minutes remaining in the period, and Okuyama fired an overhead kick narrowly wide in the final minute as the match remained level at the first break.

Japan pulled away in the second period, first restoring their lead in spectacular style, with Akaguma netting a fabulous bicycle kick in the 16th minute and Okuyama scored an equally impressive two minutes later to stretch the advantage to two goals.

The streak of sensational overhead goals continued seconds later with Okuyama finding the net with yet another bicycle kick, and things got even worse for Bahrain when Isa Al Doseri was sent from the pitch, their second red card in as many matches.

Ozu continued Japan's hot streak when he slammed home their fifth goal seconds later, but Jamal slotted a 22nd-minute penalty to give his slide - now back at their full five players - a glimmer of hope at 5-2 with one period remaining.

A sweet left-foot finish into the bottom corner from in-form Yamauichi got the finale off to a dream for Ruy Ramos' side, and it took some commendable saves from Abbas to prevent further damage in the immediate aftermath.

Takaaki Oba saw an effort bounce into the upright, before Tomoya Ginoza made the second of two outstanding final-period saves as Japan completed the first stage of the competition in impressive fashion.
Ruy Ramos, Japan head coach

"The result is okay, but I'm still not satisfied with the game in detail. There were many mistakes and the players should be more aggressive, The opponents were good as well, but I'm not satisfied with the game itself. To be honest we are slightly getting better, but we need to be more competitive in the next stage, it's not at the level of the target we are aiming for. I'm not sure I'll be on the bench for the next game. Maybe I'll be playing!"

"My team gave everything they could. They were warriors on the field. They fought. We had a player who didn't play because of a red, and today another red card. This made it difficult for my players, because we are playing against Japan, who are one the best teams in the world, who have a league, who train all the year and make their training camp in Brazil. They have a very high technical level. We tried hard."