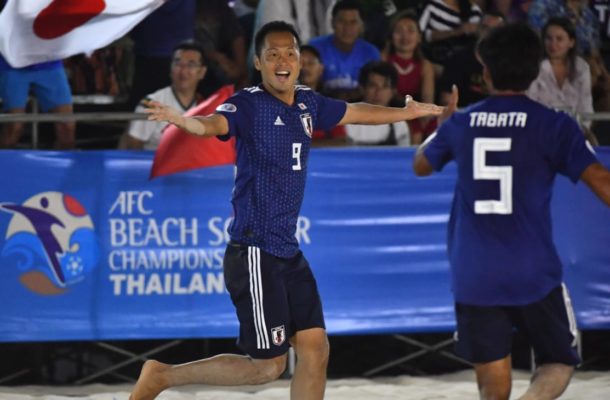 Pattaya: Japan took the first step towards the AFC Beach Soccer Championship Thailand 2019 knockout stage, and issued a statement of intent, sweeping Kuwait aside to win their tournament opener 8-1 on Friday.


Shusei Yamauichi helped himself to a hat-trick, while Ozu Moreira and Takaaki Oba scored two goals each as the East Asians registered the biggest win of the tournament thus far to take top spot in Group C.

Japan are the only Asian nation to have appeared in every FIFA Beach Soccer World Cup, and they will seal a return to the global showpiece if they finish as one of the top three sides at Thailand 2019.

Kuwait coach Ahmed Abdelrazak revealed his optimism for the team's future pre-match, and his side defended well early, but Ozu broke the deadlock with an eighth-minute volley that was struck so well that goalkeeper Nawaf Hajiaj could only stand and watch it fly into the top corner, despite it coming from well inside the opposite half of the pitch

Japan's class began to show, with Oba adding to their lead with a sweetly hit dead ball effort, before another long range stunner from Ozu gave Ruy Ramos' side a 3-0 lead at the first break.

Yamauchi continued the onslaught, pouncing on a sloppy giveaway in the Kuwaiti defence to score within seconds of the restart, before Kuwait's Abdullatif Al Hamad got his side on the scoreboard, only for a searing second from Yamauchi following only seconds later.

Kuwait tried valiantly to stem the flow, but Yamauchi's purple patch continued in the 23rd minute, when he completed the tournament's first hat-trick with a low effort which made it 6-1.

Oba took a heavy accidental blow from Al Hamad's high boot, but rose to his feet to score Japan's seventh in the first minute of the final period, before Mohammad Al Shaer provided a Kuwaiti highlight with an impressive double save after he had hauled down Naoya Matsuo.

Masayuki Komaki then completed the scoring by beating Al Shaer with an overhead kick with five minutes remaining, sealing an impressive start to Japan's campaign.

Japan's attention now turns to Sunday's meeting with Qatar, while Kuwait go into their match against Bahrain knowing a loss is likely to seal their elimination from the competition.
Ruy Ramos, Japan head coach

"The first game was always going to be difficult. The first period didn't go as planned, but the result of winning is good. However, I'm not satisfied with the performance. If we are satisfied, we cannot improve further."

"There is a big difference between us and Japan, they are more experienced than Kuwait. This is our first official match and we hope to improve. Also in Kuwait we have an age difference and a lot of older players. Considering this, our players did well."