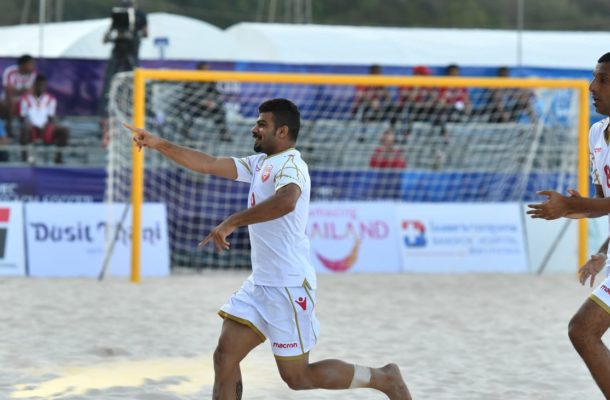 Pattaya: Bahrain secured their place in the AFC Beach Soccer Championship Thailand 2019 last eight with a 5-2 win over Kuwait on Sunday.


Mahmood Al Ghawi's side have now collected the maximum points from their two matches, and with Japan defeating Qatar 7-1 in Group C's late tie, Bahrain were confirmed of their quarter-final spot.

Two goals from Rashed Jamal proved crucial for Bahrain, who emerged from a tense contest with their greater ambitions very much in tact.

The match had plenty riding on it, and it began in dramatic fashion, with Bahrain's Mohamed Ashoor shown a straight red card in just the third minute after catching Mahdi Al Qallaf with a high boot.

Unperturbed by the loss of their captain, Bahrain managed to take the lead while still down to four men, with Abbas Zubayel finding space at the back post to finish a great move which criss-crossed the pitch in the fifth minute.

Bahrain returned to a full complement of players, but many of the subsequent chances fell to Kuwait, with Bahraini goalkeeper Sayed Mohamed making a number of saves, and memorably touching Abdullatif Al Hamad's searing length-of-the-pitch free-kick onto the woodwork to preserve the 1-0 lead after the first 12 minutes.

The early part of the second period was more of a war of attrition than a shootout, with neither side able to regularly test the opposing goalkeeper - and Al Hamad requiring treatment after being caught flush on the head by a Bahraini volley - but Kuwait's Mohammed Hajeyah got his side back into the contest when his 19th minute free-kick swerved past Mohamed to level the tie,

The joy turned to anguish for Hajeyah when he handled the ball moments later, allowing Rashed Jamal to thump home a free-kick, and it took three saves in a matter of seconds from Kuwait goalkeeper Nawaf Hajiah to prevent further damage before the final interval.

Bahrain took a giant step toward the three points when Jamal headed home his second from an inch-perfect Mohamed Darwish cross, and an unfortunate own goal from Al Hamad in the same minute gave them even greater breathing space at 4-1.

They will close out their preliminary campaign against FIFA Beach Soccer World Cup stalwarts Japan with the winners finishing top of the group , while Kuwait must now look to their final match against Qatar for a consolation.
Mahmood Al Ghawi, Bahrain head coach

"The game was very difficult, and we knew it would be difficult, because for this Kuwait team, it was their last chance. The red card made it difficult, and Kuwait played a very, very strong game, but thankfully we won. My plan is to take it step by step. Qatar, Kuwait, then Japan, and we want to win every game."

"I have set my plan to start with a new generation at the end of this tournament. I was frank with the Kuwait FA when I signed the contract, that this team's age is very high and I want to make a new team after this tournament."