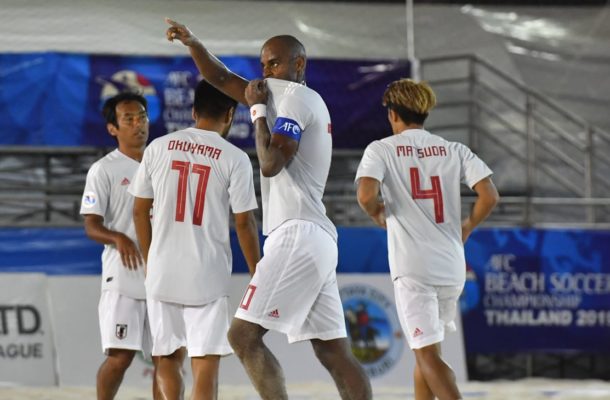 Pattaya: Japan eased into the AFC Beach Soccer Championship Thailand 2019 quarter-finals with a comprehensive 7-1 win over now-eliminated Qatar in their Group C clash on Sunday.


Japan started slowly, even falling behind to the unfancied Qataris, but clicked into gear with five goals in the second period to reach the top of the group with one game remaining.

The Ruy Ramos-coached side will meet Bahrain, who have also advanced, on Tuesday to determine the group winners, while Qatar will look to salvage some pride in their final match against Kuwait.

The East Asians had beaten the Qataris 14-0 in their meeting at the 2017 edition of the tournament, and many expected a similar result this time, but Qatar managed to keep them at bay early, with Japan's attacking weapons misfiring in their initial attempts.

Having absorbed the early pressure, Qatar took a stunning lead with just over a minute left in the opening period, with Srhan Al Khlif getting on the end of Mubarak Al Muhazaa's pass to sweep the ball home.

Despite their excellent start, Qatar remarkably still found themselves behind at the first break, with Ozu Moreira scoring a belter from the kick off, and Takaaki Oba finding the bottom corner seconds later to have Japan in the driver's seat after all.

The favourites really got up and running in the second period, when Oba's corner set up Takuya Akaguma's header in the 15th minute, and a pair of Masanori Okuyama free-kicks created additional breathing space.

Ozu made a free kick look decidedly easy when he made it six in the 22nd minute, before Shusei Yamauchi - fresh from a hat-trick against Kuwait - scored with a feather-touch of a header to give Japan a commanding 7-1 lead with one period remaining.

The final period belonged to Japan too, only this time they were prevented from running the score up by Qatar goalkeeper Amro Fawzi, who made a number of late stops to keep the winning margin from extending any further.

But the damage was done for Qatar, who remain winless from two matches in Pattaya, while Japan's road the last eight has been travelled in the minimum time.
Ruy Ramos, Japan head coach

"Winning is good, but I'm not satisfied. In the first game the team was focused but in the second game tonight the team was not playing as we want. In the third quarter. even though the score is 7-1, the quality of play is not as we want."

"It's a difficult game, but believe me, my team has improved a lot. We lost 14-0 against them two years ago. We lost four goals from free-kicks today. I came to this competition to improve my team, and I now see the level of all countries, and hopefully by the next tournament this team can achieve something."