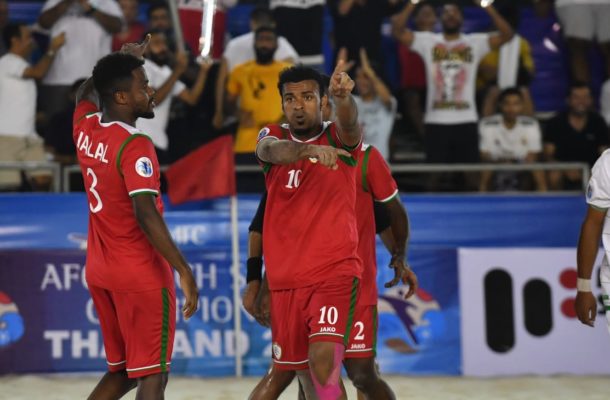 Pattaya: Oman made a strong start to their AFC Beach Soccer Championship Thailand 2019 campaign, and immediately sealed their place in the quarter finals with a 6-3 win over Iraq on Sunday.


Two goals form Abdullah Salim contributed to a terrific team effort from Talib Hilal's side, who underlined their status as one Asia's beach soccer powers.

The win sends Oman to the top of Group D - and sets up a group-deciding clash with holders Islamic Republic of Iran on Tuesday - while Iraq's Thailand 2019 schedule ends after two losses.

Oman were the last team to get their campaign underway, but they certainly made up for lost time in the early stages, starting in stunning fashion to take the lead when Abdullah Salim poked the ball high into the net in the second minute.

Two minutes later they were two goals ahead, with Jalal Al Sinani's intelligent pass leaving Musaab Al Breiki with the simple task of tapping the ball into a gaping net.

Salah Hasan pulled a goal back for Iraq when he followed up to scramble Ali Jabbar's acrobatic initial effort over the line in the fifth minute, before Mohammed Sami produced a superb penalty save to prevent Al Breiki from scoring his second.

It looked as though the status quo would remain until the break, but a perfectly struck free-kick from Khalid Al Oraimi gave Oman a 3-1 lead, and breathing space, at the end of the opening period.

Salim then turned the breathing space into a chasm when his lovely cushioned finish across the goalkeeper made it four in the 15th minute, and Sami Al Bulushi extended it even further when he delicately scored another one three minutes later.

A stunning Nooh Al Zadjali half volley forced Mohammed Saad into an equally excellent save in the 27th minute, but Saad spilled a long-range free-kick from goalkeeper Amjad Al Hamdani a minute later, allowing Ishaq Al Qasmi to follow up and make it 6-1.

Murtadha Qasim swept home a late consolation goal for the Iraqis, and Ali Ahmed turned in another one off the post in the final minute, but there was little they could to salvage their side's knockout stage hopes, as Oman sealed a solid start to their campaign.
Talib Hilal, Oman head coach

"First of all, I want to say thanks to my players, they did a good job. The match was not easy. We were well prepared because we knew we were going to play with a strong team and my players did a good job and played as we planned. Now our concentration goes to the game against Iran."

"Before the match we knew, we were playing against a really good team. Oman has good experience. From 2008 until now, they didn't change their coach. Talib Hilal stayed all the time. He's a perfect coach and he's changed just a few players from 2010 until now. They played in the World Cup, but my players don't have this experience. Today we lost as we are a young team with maybe 25-30 days of training. I think it's a good result. We only have top level teams in this group. I think after two months of experience this result is okay."