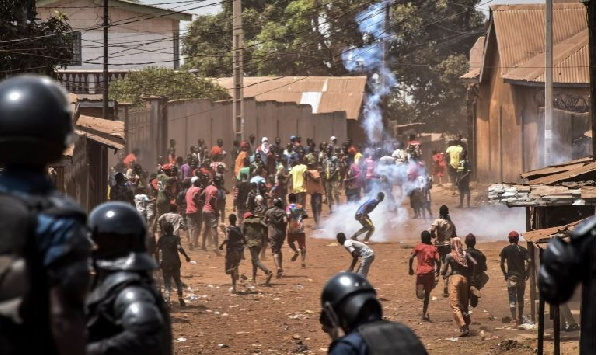 File photo: Police have barricaded Diallo inside his house for days

International envoys mediating in the violence following Guinea's disputed election have urged the government to lift a blockade of the home of opposition leader Cellou Dalein Diallo.

Representatives from the United Nations, African Union and the 15-nation West African bloc ECOWAS said in a statement on Tuesday that "Guinean authorities (must) lift the barricade in the spirit of inclusive dialogue".

Police have barricaded Diallo inside his house for days, as post-election clashes between his supporters and security forces flared last week.

President Alpha Conde, 82, won the October 18 election according to official preliminary results announced on Saturday, which would give him a controversial third term in office.

He pushed through a new constitution in March which allowed him to bypass a two-term limit for presidents. The move sparked mass protests, which were met with deadly crackdowns by security forces.

His self-proclaimed victory led to unrest.

The international envoys - who include ECOWAS Commission President Jean-Claude Kassi Brou and the UN special representative to West Africa, Mohamed Ibn Chambas - landed in Guinea on Sunday to mediate.

In a statement on Tuesday, the representatives said they had come to "lower sociopolitical tensions" after the election.

They urged Guinea to investigate and bring the perpetrators to justice.