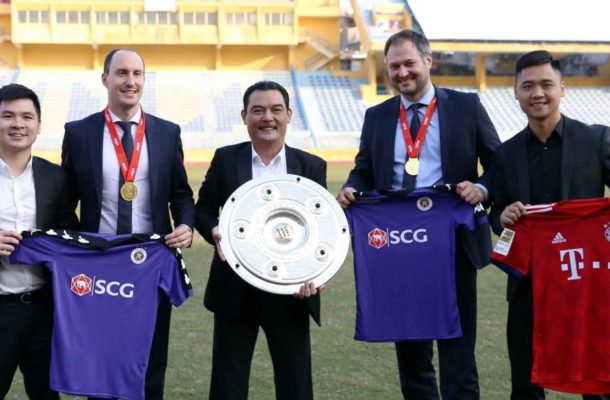 
Hanoi, who will feature in the 2019 AFC Cup, have signed an agreement with the European giants which will see the clubs exchange ideas in developing and managing football infrastructure.

“The representatives of Bayern Munich met with the officials from T&T Group (owners of the Vietnamese club) on Monday morning,” Hanoi FC said in a statement.

“It is indeed a proud moment for our club as Bayern Munich is one of the best football clubs in the world,” it said.

“The agreement will see Bayern Munich share their expertise in development of football facilities and exchange ideas regarding the design, build and management of infrastructure like stadiums and academies,” Hanoi FC added.

The agreement also enables Hanoi to set up a Bayern Munich Football Academy in Vietnam which will aim at producing a new generation of Vietnam stars.

Chu Dinh Nghiem’s side are in Group F of the 2019 AFC Cup with Singapore’s Tampines Rovers, Naga World of Cambodia and Myanmar’s Yangon United or Zwekapin United FC.

Hanoi reached the knockout stage of the AFC Cup in 2014, where they lost 3-0 on aggregate to eventual runners-up Erbil Sports Club of Iraq.

The deal with Bayern Munich is another step forward for the Southeast Asian nation who won their second AFF Cup title last Saturday after defeating Malaysia 3-2 on aggregate in the final.