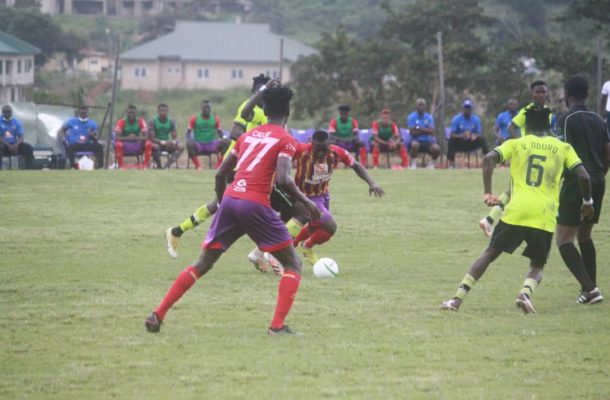 It was a bad day at the office for Accra Hearts of Oak as they lost 2-0 to Dreams FC at the Theater of Dreams Park in Dawu.

The first half ended goalless after the phobians squandered a flurry of chances to take the lead while the home side also had chances of their own.

The turning point of the game was the red card after being shown a second yellow card that was shown to Hearts defender Muniru Sulley for a needless foul.

Dreams FC on Sunday recorded their first ever win over Accra Hearts of Oak at the Theater of Dreams as they beat 10 man Hearts of Oak.

The game was dominated by the visitors in first half switched to the Still Believe lads favor and they made no mistakes in utilizing two of the many chances that came begging.

Late in the game, the home side added a second goal through Sylvester Simba to seal the victory after some lax goalkeeping from Ben Mensah.

This victory is marked as a sweet revenge for Dreams Fc given they suffered a 3-0 humiliation in the first round of the on ongoing/2021 Ghana Premier League at the hands of the Phobians.

The fierce encounter which lasted 99minutes has now put Dreams Fc on the fifth spot of the league log.