Here are the deputy ministers nominated to the Ministry of Finance 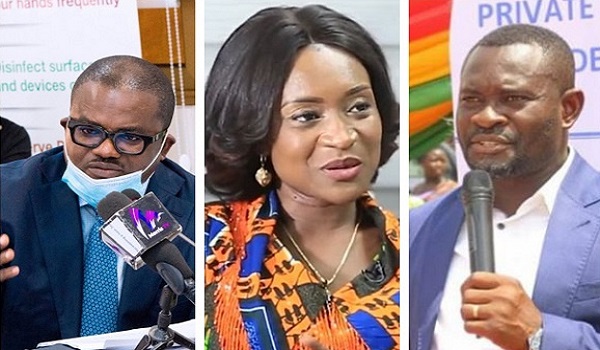 President Nana Addo Dankwa Akufo-Addo has finally named a full list of deputy ministers in a bid to complete the formation of his second tenure office.

The presidency on April 21, 2021 released some 39 names who, following vetting and approval by Parliament, will serve as deputy ministers in various capacities of government.

But the Ministry of Finance and Economic Planning, which is a rather critical sector of government will see a few changes as compared to what President Akufo-Addo’s first tenure looked like.

Charles Adu Boahen who was a former deputy minister under Ken Ofori-Atta has now been nominated as the Minister of State in charge at the Finance Ministry.

Ken Ofori-Atta will now be deputized by Abena Osei-Asare, while the Member of Parliament for Ejisu and former Chief Executive of the National Entrepreneurship and Innovation Plan, John Ampontuah Kumah, will serve in the capacity as a second deputy minister.

Following the approval of Ken Ofori-Atta by Parliament in March this year, there have been some fallouts within members of the Appointments Committee of Parliament.

Notable among these was the sudden resignation of National Democratic Congress (NDC) MP for North Tongu, Samuel Okudzeto Ablakwa, from the Committee over personal reasons.

Sources within the Minority caucus of the House have however linked his resignation to the approval of Ken Ofori-Atta as Finance Minister for a second tenure.

But Mr. Ablakwa in a statement explained that his decision was based on principle, a decision that was eventually accepted by the Speaker of Parliament, Rt. Hon Alban Bagbin.

See the three nominated Deputy Ministers of Finance below:

Charles Adu-Boahen: Minister of State in charge at the Ministry of Finance.