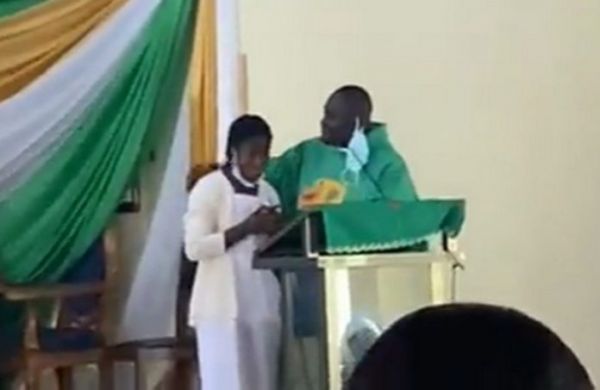 It has emerged that the Reverend Father, who was caught on camera kissing some students of St. Monica’s College of Education in Asante Mampong, did so as an act of reward.

A reporter in the area, Kwasi Oppong, who visited the school after the video went viral, said on Adom FM’s morning show Dwaso Nsem Tuesday that the incident was not the first to have happened.

According to Kwasi Oppong, with the previous incident, some of the students revealed to him that the reverend father rewarded the students and presented them with certificates and cash to show appreciation for their years of service in the school and the latest reward is what is described as the ‘holy kiss’.

He said some of the students have declined to speak to the issue and others have willingly given their side of the story.

“Some of the students I managed to speak to told me the father always rewards students in the school and so this time he decided to kiss the students. So far we only know of three students who were kissed by the priest,” he reported.

The Reverend Father engaged in the act after a church programme in the school.

The action by the Reverend Father has received some condemnation on social media as it has been described as unbiblical.

Some have even questioned whether his action is part of the Anglican beliefs.

To others, kissing in the midst of the deadly COVID-19 virus is unacceptable and should not have been entertained.