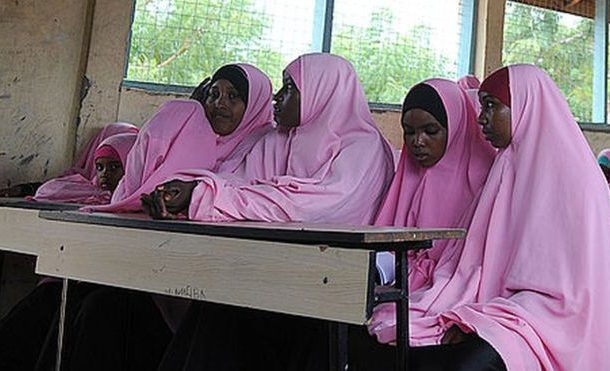 A court in Kenya has ruled that Christian schools may not ban Muslim girls from wearing hijabs as part of their uniforms.
A church-run school had banned female pupils from wearing the headscarf, saying that allowing students to dress differently created discord.

But judges ruled education promoters must embrace the principles of diversity and non-discrimination.

Some 11% of Kenyans are Muslims while 83% follow the Christian faith.

The country has had a long-running row over the place of the hijab at schools that are funded by Christian Churches, with some such schools banning the garment outright.

But following this ruling, Muslim girls will be able to wear headscarves to school.

They will also be able to wear trousers instead of skirts to school, as long as they are white. This brings Christian schools into line with the uniform policy at state schools.

Large swathes of northern Kenya have received very little government support over the decades and have grown to depend on schools and hospitals run by Christian missionaries.

In counties like Garissa, Mandera and Lodwar, the best-performing schools were run by Christian missionaries. Rules included studying Christianity and, at Catholic schools, attending Mass together at daybreak. The challenge came as Muslim students joined these schools.

One Muslim parent told me that at first, she had accepted the rules because of the school's great results. She wanted her daughter to go to university. But with time, she found the school to be in conflict with her family's religion. Teachers suspended her daughter rather than allow her to pray in the Islamic way.

Eventually this mother became one of the parents who challenged the school's uniform policy, leading to Friday's ruling. She said: "This decision is very good not for my daughter alone but for many students like her in north-eastern Kenya where practically the best schools are run by Catholic nuns."

Female students at St Paul's Kiwanjani Day Secondary School in Isiolo County had been banned from wearing a hijab and white trousers in addition to their uniform.

Local authorities ordered that Muslim girls must be allowed to wear hijabs and the Methodist Church challenged their directive in court. But three judges agreed with the local authorities.

The judges said students are "bearers and exercisers of the full guarantees in our bill of rights and they are no less entitled to those rights by reason only of being within school gates".

Local media report that the court said the hijab ban discriminated against Muslim girls "in so far as it prohibits and prevents them from manifesting their religion".

The case may have knock-on effects for other minorities, such as the Christian sect the Akorino, who wear turbans.

One father, John Kamau, told the BBC the ruling had come too late for his son, who was suspended from four different schools for breaking the rules.

"The law is good," he said, "but it cannot bring back wasted opportunities and life lost because school principals were overruling the Kenyan constitution and intimidating our children."