History-making Malaysia hoping best is yet to come 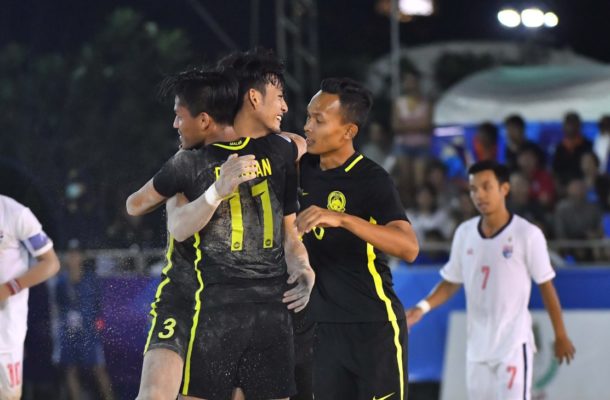 Pattaya: Malaysia head coach Mohammed Faizal So'od says his side have reached new heights in the AFC Beach Soccer Championship Thailand 2019, but called on them to improve even further in their quarter-final clash with United Arab Emirates.


So'od's side progressed to the knockout stage by the barest of the margins, advancing by virtue of their head-to-head record after finish level with Thailand on three points, with Thailand's parting 2-0 win over Afghanistan proving crucial.

But the level of the Southeast Asian side's play has steadily, and notably, improved, with player Shafiq Riza Huzair labelling their performance in Monday's 6-5 defeat to Palestine, the team's best ever.

So'od agrees the showing against Palestine was a new high, but said he is hoping the Malaysian side will deliver an even better display in their cutthroat quarter-final against the Emiratis.

"I also said the same thing (as Shafiq), but we already had a discussion and meeting with our players, and (we hope) that it's not our best performance," he said.

"We hope that tomorrow's game will be our best performance."

Malaysia's run to the last eight puts them in contact with a UAE side which has participated in five FIFA Beach Soccer World Cups, and who has reached the final at the previous edition of the tournament in 2017.

The Emiratis are strong favourites for Thursday's quarter-final, but So'od believes the match, and the tournament as a whole, will be remembered as a hugely beneficial experience for the sport in his country.


Matchday Three Highlights: Groups A & B

"I'm very happy, and very grateful for this opportunity to be in the knockout stage," he said.

"We respect the UAE team, but at the same time we will try to give a good fight and get a better result. Of course, UAE is a World Cup team, and we hope gain from the experience of playing with them.

"This is the first time for us to be in the knockout stage, and this is history for us, so I hope, because of this tournament, beach soccer will be more popular in Malaysia."

So'od's respect for their opponents is mutual, according to UAE head coach Mohamed Almaazmi, who believes Malaysia are growing in stature with every appearance in the competition.

"I think in the first game of the Malaysian team in this tournament they were not in form, but in the second match against Thailand which they won, Malaysia was very good, and in the third match I think they were unlucky."

"I'm very surprised by this team, they have a good tactical level and a good coach. I think tomorrow will be a strong match between my team and Malaysia, and I hope for a good performance from my players."

UAE won all three of their matches in Group B, putting six goals past both Kyrgyz Republic and China PR before digging deep to come from two goals behind to beat Lebanon 3-2.

The winners of the match between UAE and Malaysia will advance the AFC Beach Soccer Championship semi-finals, where they will face either Oman or Bahrain.