How a Ghanaian dancer was ‘grinding’ Beyoncé in the ‘Already’ video 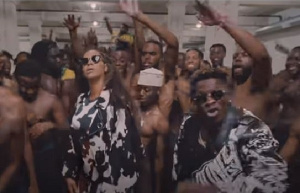 The young man was stucked behind Beyonce like 'glue'

Seems this guy had his own agenda aside from playing his role as a dancer in Shatta Wale and Beyonce’s newly released ‘King Already’ music video.

The unidentified young man did not slack as he was seen dancing vigorously behind Mrs Carter.

In what was seen to be a group dance with Beyonce and Shatta Wale standing in front of the dancers, this young man focused on ‘whining’ his waist behind Beyoncé instead of focusing on the cameras.

All these happened at the last part of the music video, specifically at 3minuites:45 seconds.

Meanwhile, trending across all the social media platforms now is the Shatta-Beyoncé “Already” music video.

The video, barely after 24 hours after its release has reached a number of views of over 3 million on YouTube.

Also, a good number of celebrities have taken to their various social media platforms to congratulate the ‘dancehall King’ for his 'mind-blowing' achievement.