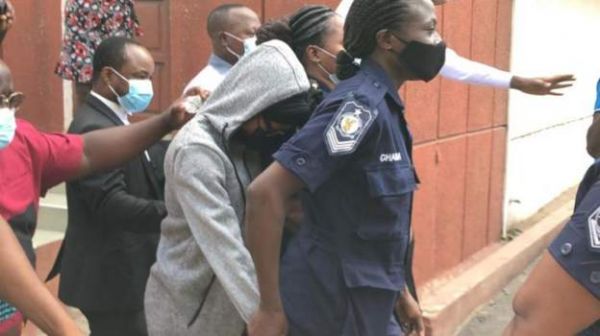 Ghanaian actress Rosemond Brown, popularly known as Akuapem Poloo, has been sentenced to three months in prison for posting a naked photo of herself on social media beside her son.

She broke down in tears after the judge read out the sentence in the court in the capital, Accra.

In the photo, posted last July to celebrate her son’s seventh birthday, she is crouching, facing the boy and holding his hands. He is wearing underpants. Her breasts are hidden by her long hair.

The image when viral and there was a huge backlash online.

The actress apologised, but was invited for questioning by the police.

Then Child Rights International, a non-governmental organisation, pushed for her prosecution.

On Wednesday, she was found guilty of publishing obscene materials, engaging in domestic violence and undermining the privacy and integrity of another person - and was taken into custody.

The announcement of her sentenced was postponed until Friday as the court was waiting for the result of a pregnancy test, which came back negative.

The court said the sentence would serve as a deterrent to the general public.

Social media users have been calling for her release using the hashtag #FreeAkuapemPoloo.

Celebrities like Ghanaian rapper Sarkodie said it was harsh to separate a child from his mother.


Singer Stonebwoy said the actress's son would suffer more if she was jailed: