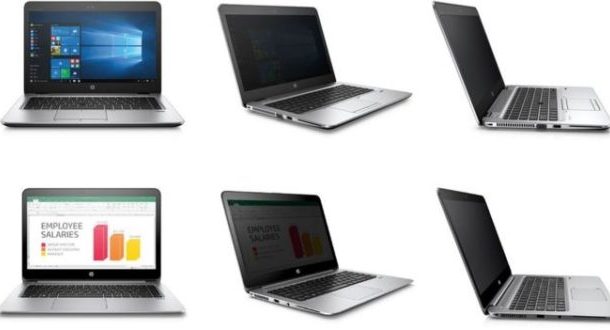 Computer firm HP has developed two new laptops that feature an optional privacy mode, which obscures the screen unless viewed face-on. The technology, called Sure View, darkens the picture by “up to 95%” when observed from wide angles. HP said the laptop can ensure privacy when used in public spaces.

One analyst said it could appeal to security-conscious enterprise customers. Numerous peripherals companies already manufacture attachable glue-on screen filters that achieve the same effect, but HP claims its Sure View technology is the world’s first “integrated” privacy screen. It will launch with two new 14-inch laptops.

Pressing the F2 key enables the privacy mode, which HP said can reduce “up to 95% of visible light when viewed at an angle”. HP said the technology is becoming more of a necessity because of “visual hacking”, a term it uses for infiltrating accounts by spying on people using their laptops and smartphones.

‘Nothing new’ Chris Green, a technology analyst for communications agency Lewis, played down the impact of HP’s technology. “Angled screen view protectors are nothing new, they have been around 30 years,” he said. He added that while over-the-shoulder hacking is a security issue “it’s not something that the industry is measuring with any research”.

But Patrick Moorhead, a principal analyst for Moor Insights & Strategy, said that integrating the filter made the tech more dependable for enterprise customers. “With the glue-on filters, IT departments don’t actually know if you are using them. They may think they are managing security but they don’t know for sure if that filter is on. “So to me this lowers the risk, because IT departments can program the laptops so that the filter is always on.”

Moorhead said the tech would be particularly useful “in environments of high security and high privacy such as healthcare, government, and even consultancy firms”. He added that, while there is little research to measure the prevalence of visual hacking “anecdotally I think it happens a lot”. Research conducted by the Ponemon Institute in Michigan claimed that nine out of 10 attempts to acquire sensitive business information using only visual means were successful. Privacy firm 3M, which developed the Sure View technology for HP, funded Ponemon Institute’s research.