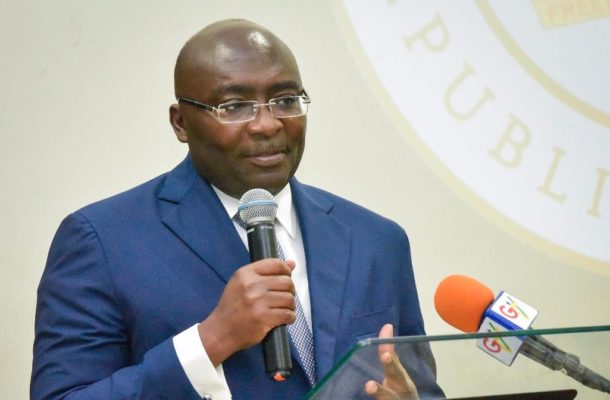 After declaring Dr. Mahamudu Bawumia as the next President of Ghana, Theresa Addison says she "acted irresponsibly."

The Presidential Staffer declared Dr Bawumia the next President during the funeral of late Kwadwo Owusu Afriyie also known as Sir John.

According to her, in announcing the donations for President Akufo-Addo and his Vice Bawumia, she predicted that Dr. Bawumia will be the next president.

She said her ‘reckless pronouncement’ at the function is not in line with the rules of the NPP.

“In the course of the announcement, I made an unfortunate remark to the effect that H. E. Alhaji Dr. Bawumia will be the next President of Ghana. Upon a sober reflection, I have come to the realization that I acted irresponsibly and the said assertion was needless and inappropriate,” she said in a statement sighted by Kasapafmonline.com.

She continued “On this premise, I regret my actions and sincerely retract and apologize unconditionally to the Leadership and rank and file of the NPP for making such prejudicial comment that is offensive to the rules of the party.”

The late Kwadwo Afriyie passed on at Korle-Bu Teaching Hospital in Accra last year July 1, 2020 after battling with Corona-Virus (COVID-19).

The funeral rites of the former Chief Executive Officer of Forestry Commission started yesterday with persons from all the political divide attending.

The former General Secretary of the NPP will be laid to rest at his hometown Sakora Wonoo in the Kwabre East District of the Ashanti Region.