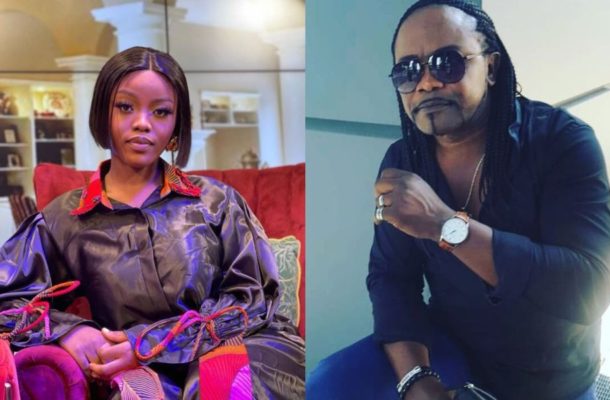 Daughter of Highlife legend, Nana Acheampong known in showbiz as Gyakie has told Amansan Krakye that she didn’t ride on her father’s influence for her early claim to fame in Ghana music industry.

“It wasn’t my father’s influence per say because when I started music I didn’t come out to say that Nana Acheampong was my father,” she remarked.

“It was when we dropped the artwork for my EP we had the picture of me, my father and my sister so that’s even recently in August 2020,” she said on Kastle FM monitored by MyNewsGh.com

She added “So when people saw that picture, that’s when they actually realized that my father is Nana Acheampong but when I started doing music people didn’t know about it”.

Speaking in an interview on Kastle FM’s Entertainment Show, Gyakie revealed that though she didn’t ride on her father’s popularity from the onset, however, it has helped her to get some people to know her music.

“But after people got to know that he’s my father it has made a lot of people come to know my music due to the love they have for my father,” she continued.

“But I won’t say that 100% since I started music because he’s my father that’s why I have reached this point quite soon,” she told the host.

She ended “It took a lot of hard work, God has also been good to me and then the radio presenters, DJs and the fans who listen to my music are all involved that’s why I’ve gotten here early than the normal”.