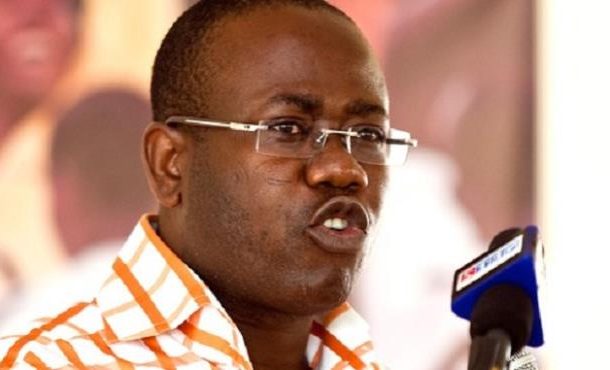 In a sharp response to the Minister of Youth and Sports, Hon. Nii Lante Vanderpuye. Ghana FA Boss Kwesi Nayntakyi has strongly refuted claims that he belongs to the main opposition party the NPP insisting he doesn't belong to any political party.

Ghana's Sports Minister had revealed in a whatsapp chat a few weeks ago that Nyantakyi was an NPP person describing him as the 'NPP Obama'.

The Minister also insisted that he deals with people who are fair and honest insinuating that the Ghana FA Boss was not in a whatsapp Q&A session on Football Africa Arena when he was asked about whether his government will endorse the FA Boss for the FIFA Council election.

Responding to questions on the same platform, the Ghana FA Boss reacted to the Minister's response saying he does not belong to any political party.

"I have been made aware of a conversation he made on a platform for some members of the ruling NDC party. He described me on that platform as the 'NPP Obama' which means I am a key member of the opposition party.

"Such statements are calculated to draw the ire of NDC against me in a country where many people take political affiliation seriously," Kwesi told Africa Football Arena

"Let me state that I am not into politics and I don't belong to any political party," he added.

"I have served all parties with honesty, respect and worked with everyone with the sole aim of furthering the cause of my country Ghana through football and make it the best.

"I hope the GFA is still not facing what it faced since 2009 with the desperation of painting me as a member of the NPP just to look bad in the eyes of NDC supporters.

"I have friends in all parties in Ghana and I want it to remain like that. Football is supposed to unify us as Ghanaians not divide us," he noted.

Nyantakyi then described the Minister's attitude towards the FA and their activities as an act of double standard as he (The Minister) behaves differently in public from their private interactions.

"The minister said his relationship with the GFA is based on truth, fairness and honesty and even cited his Christian upbringing," he continued.

"We have a cordial relationship with the Minister when we meet him but his public utterances paint a different picture.

"I have counted over 30 radio and television interviews he has done solely attacking the GFA, our national team coach Avram Grant, players of the Black Stars and our league without even appraising himself with the situation on the ground before making his conclusions.

"We have heard of major football policy decisions on radio without him informing us or consulting us. We hear about some of these policies through his radio or television interviews. I don't think this is the best approach.

"We are very open to the Minister and we are always open and available to answer to his concerns anytime he wants. His utterances on radio has led many to believe that perhaps he has personal score to settle with people in football," the new FIFA Council member noted.