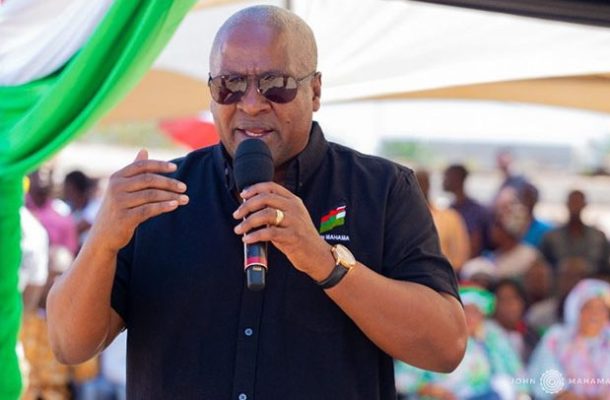 Former President John Dramani Mahama has denied claims that he owns a Swiss bank account which has an amount of over $100 million.According to him, he has only 3 bank accounts - ADB, Zenith, and Guaranty Trust bank -, hence any person who thinks otherwise can probe into that.

“I don’t have any foreign account anywhere, I have three bank accounts – ADB, Zenith, and Guaranty Trust bank. If you want to investigate me, investigate those banks, my money is all there," Starrfm.com.gh reports he said this on Cape 93.3 Fm in Cape Coast.

Mr Dramani Mahama added that people who criticised him when he was in power have now become silent.

“You made so much noise, and now you’ve all gone quiet. You’ve all been cowed. You can’t talk. There were all kinds of propaganda against me. They said Lordina and I have stolen $100 million into a Swiss Account. How would you get access to that kind of money? World Bank money doesn’t come to Finance Ministry. It’s with the BoG, how do I go to them to ask for such money and transfer it to a Swiss account?" he added.

His comment falls at the back of a publication by Pierre Wimhoven of the Associated Press News (APN) concerning President Mahama hiding $170 million in a foreign Bank account.

In the said article, the writer alleged that former President John Mahama and his wife, Mrs Lordina Mahama, hid a tune of $170 Million in a Swiss bank account.

It is alleged in the said article that World Bank and IMF officials are contemplating suspending aid to Ghana.

John Mahama has, however, denied this claim availing himself for further investigations.