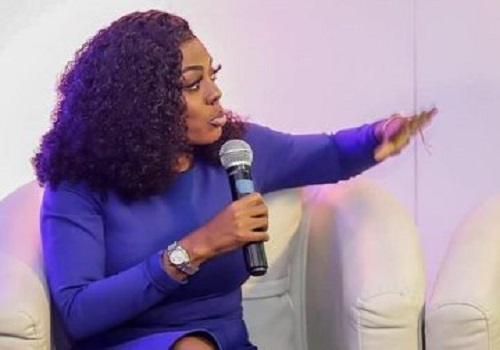 Journalist Bridget Otoo has suggested that she would have done something different than apologising if she found herself in the shoes of Nana Aba Anamoah who rendered an apology to Koku Anyidoho when the guest threatened to walk off a live interview at the mention of his estranged wife.

On her maiden edition of the Starr Chat show, March 10, 2021, all hell nearly broke loose when Nana Aba Anamoah asked Koku Anyidoho if a message was sent from his end to his estranged wife on International Women’s Day.

Koku Anyidoho who had been evasive throughout the interview got incensed by the question and threatened to walk out of the studio.

"I will walk out of the studio, don’t annoy me. If you want me to disturb you, I will go. If you want to see the other side of me, you will see it. I don’t take no hostages," the politician said.

An obviously livid Koku Anyidoho stood up and tried to pack his things to leave the studio but opted to continue the interview after Nana Aba Anamoah apologized.

Mr. Anyidoho's wife, Jennifer Abena Boahemaa Yeboah, had in an interview with GhanaWeb accused him of sacking her from their matrimonial home amid claims that he was the cause of the death of their daughter Sitsofe.

Reacting to the incident, Bridget Otoo in a tweet said "Nana Aba asked Koku if he reached out to his female friends and his wife on ‘International Women’s Day, Koku Anyhidoho becomes angry and visibly shaking and threatened to leave the studio!!! I don’t have that kind of restraint @thenanaaba had!" 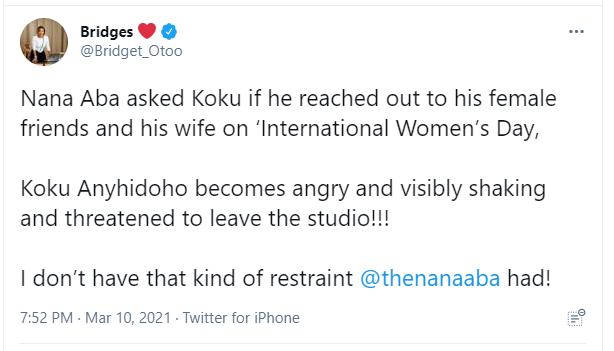