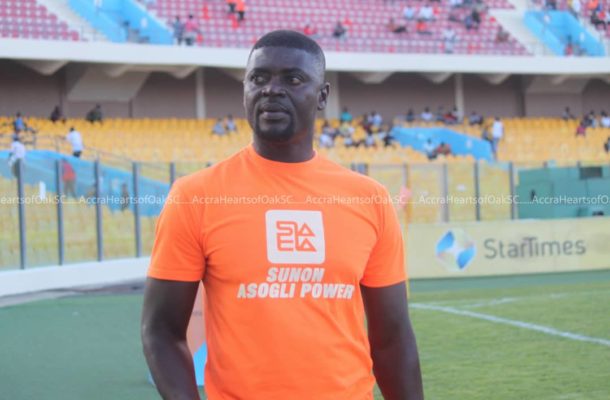 Hearts of Oak head coach, Samuel Boadu says he does not know exactly what his former side Medeama SC want from him after serving them diligently for three years.

According to the coach Medeama's decision to put undue pressure on him following his resignation is the 2-0 defeat his new side Hearts inflicted on Medeama last Sunday at the Accra Sports Stadium.

"I don't even know what a club I have worked with for three years want from me. Maybe Moses Parker and the management of Medeama SC are doing all these because we [Hearts of Oak] defeated them on Sunday," Boadu said in an interview.

He says that his former club have been unfair with him and he is ready to engage them in a legal battle as far as CAS.

"I went to Moses Parker to submit my resignation letter to him and he even wished me. It's an unfair treatment from Medeama and ready to even battle with them legally at Court of Arbitration for Sports (CAS),"

Samuel Badu has been slapped with a judgement debt of GHC30,000 to be paid to his former employers Medeama SC.

This follows the coach's unilateral termination of his contract mid way through the season.

The Player Status Committee found the Hearts coach guilty for breaching his contract without due course.

Medeama were seeking substantial damages to the tune of GHC320,000 for their former employee's unilateral termination of his contract including compensation for causing them stress among others.

The player Status Committee refused Medeama SC's their residual status claim and awarded them what in their eyes will be peanuts.

The former Asokwa Deportivo coach sent shockwaves through the footballing world when he decided to resign from the Tarkwa based club without any issues with the club.

Barely seven days after his resignation he took over the vacant  Hearts of Oak coaching job.

Medeama unhappy with the GHC30,000 compensation has filed an appeal against the decision of the Player Status Committee.