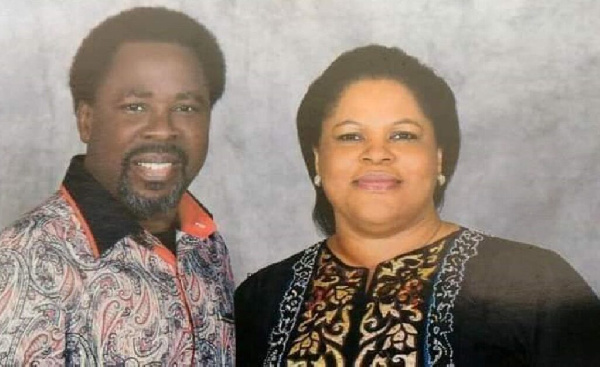 It’s been over 48 but it has emerged that she has finally spoken, sharing the final moments she spent with her husband, Temitope Balogun Joshua, who died on Saturday, June 5, 2021, at the age of 57.

Evelyn Joshua has shared the mood her husband was in the lead up to his sudden death that evening after holding a church event with partners of his church, the Synagogue, Church of All Nations (SCOAN).

The widow, speaking with some selected journalists the day after he died, indicated that her husband died “prayerfully", reports saharareporters.com.

“He ended the race prayerfully. He spent about three hours in prayers before the last service on the mountain and was looking very healthy.

“He never showed any sign of illness or worry.

“Afterward, he came up to shower. Few Minutes later, he stepped out for ministrations. While ministering, he spoke about a time to come and time to leave.

“His statements were spiritual and suddenly, he left the stage and went to his inner chambers,” she is reported to have said.

Evelyn then waited a few minutes and thereafter decided to check on him.

“I met him sitting on the chair like someone reflecting but unconscious. His disciples came and tried to revive him to no avail. Of a truth, he went home to be with the Lord and left us with a message, watch and pray.”

TB Joshua, one of Nigeria’s most influential pastors died at age 57, and was considered a pariah among the country’s mega-televangelists and struggled until his death to be accepted within their circles, despite amassing millions of followers across Africa.