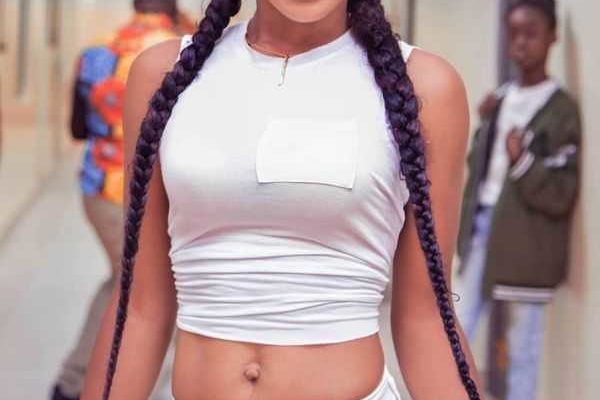 Former Deputy Minister for Gender, Children and Social Protection, Rachel Appoh has recounted how she managed to rescue actress and Instagram sensation Akuapem Poloo from imprisonment.

The former Deputy Minister, in an interview with Ola Michael on Neat FM's 'Entertainment Gh', disclosed that when she heard the Child Rights International was prepping to file a law suit against Akuapem Poloo, she quickly stepped in and did everything possible to calm down the storm for the actress but the actress and her Manager messed up the plan.

According to her, she loves Akuapem Poloo and has considered her as her goddaugther, hence when the latter broadcast last year a nude picture of herself in a pose with her son which caught the attention of the Child Rights International, for which the entity called for prosecution, she (Rachel Appoh) consulted with the Gender Minister, Cynthia Morrison and further roped in the Social Welfare Department to intervene in the issue.

"I see my childhood self in Akuapem Poloo . . . she wants to make it at all cost. That's the way I am. She is ambitious; so I always bless her," she told the host, stressing, by her intervention, Akuapem Poloo was asked by the Gender Minister to render a public apology where she would acknowlege her fault and apologize to the Gender Ministry, Social Welfare Department and all other interested authorities in order to bury the hatchet.

Poloo was also asked to do a responsible job and return to the Gender Ministry with a proof that she could cater for her son.

But Akuapem Poloo, upon the advice of her Manager, chose to render her own personal apology which she failed to recognize the aforementioned entities and their roles to protect her from going to prison.

They also failed to follow through with all directives given them by the Gender Ministry.

To Rachel Appoh, the management of Akuapem Poloo caused her imprisonment because she was close to being freed but the disobedience of her Manager empowered the Child Rights International to press for her prosecution, hence resulting in her 90-day jail term.

"Directive from the Ministry was for her to make a public apology mentioning that the Ministry of Gender, Children and Social Protection has taken the issue up. So, those attacking the Ministry for not doing anything for her wasn't true . . . But she didn't give that apology. According to the Director of Social Welfare, she didn't do it. Her Manager said she has done the first one, so the second apology wasn't important and so the Manager didn't allow Poloo to comply with the directive of the whole Ministry. That is what made the Child Rights International pick on her; actually they had already written the letter to them," she revealed.