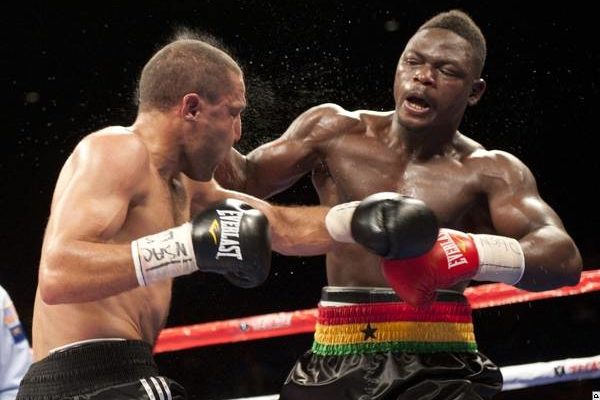 Ghana’s light heavyweight prospect Bastie Samir (17-0-1, 16KOs) has expressed his readiness to win a world title and unify the division.

The boxer made this revelation yesterday when he signed a mega 3 year promotional deal with Mr Michael Nii Yarboi Annan’s Don’s Promotions.

The former Ghana Amateur boxing team captain who once represented Ghana and won silver at the 2007 All-Africa Games was very grateful for the opportunity granted.

“Not only do I want to win the world title but I also want to unify the light heavyweight division,” he said

“You know, there is a lot of stuff going on on the internet but I really want to thank this man, Mr. Annan for the opportunity, and my coach Ofori Asare, Alhaji Innusah and all my fans.” Bastie Samir told BoxingGhana.com.

The tough boxer who ticks all the boxes to become a world champion is ready for a shot, and at age 33, the Ghanaian has tested and experienced boxing at its highest pinnacle as his exploits in the United States made the likes of Floyd Mayweather Jr. and Oscar Dela Hoya’s Golden Boy Promotions rushed for the signature of this tenacious boxer.

When quizzed on his previous deals, especially that of Golden Boy Promotions, the self-styled ‘Beast’ minced no words.

“They (Golden Boy Promotions) do not really have the best interest of black boxers. For me it’s about the opportunities and I am glad that Mr Annan is willing to offer me that. I am ready and prepared to pay back that opportunity and trust reposed in me with a world title,” Bastie Samir expressed.

Bastie Samir’s last ring battle took place on Saturday 23, February 2019 under Baby Jet Promotions, when he brutally KOed Raoul Lokossou of Benin in round 2 at the Bukom Boxing Arena in Accra-Ghana.

Now Don’s Promotions have secured his promotional rights for the next three years which sees him with an almost perfect clear-cut plan towards a world title shot. He joins other cracked boxers already on stables. Don’s Promotions is fast capturing the hearts of boxing fans with it’s mega signings which includes Nigeria’s Felix Williams, young 20-0 undefeated Patrick Ayi and ever promising Theophilus Tetteh.

According to the Chief Executive Officer of Don’s Promotions, Mr. Michael Nii Yarboi Annan, Bastie Samir and Patrick Ayi are going to headline the next promotional bill of Don’s promotions after the August 9th, which has the re-born current World Boxing Organisation Africa Middleweight Champion Obodai ‘The Miracle’ Sai and the very efficient Felix Williams co-headlining.

With Samir Bastie, the knockout artist in the fray, boxing just got bigger and exciting.