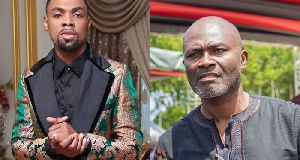 Ghanaians on social media waiting for the ‘biggest Ghana-talks-plenty war of words between Rev. Obofour and Honourable Kennedy Agyapong will be waiting in vain as the fight doesn’t seem like it will happen any time soon.

The MP for Assin Central has cleverly withdrawn from any feud with Reverend Obofour.

Ghanaians have been expecting Hon. Kennedy Agyapong, who has now become a thorn in the flesh of many ‘men of God’ in the country, exposing their lies, to do an exposé on the Founder and Leader of the Anointed Palace Church, Rev. Obofour - but it did not happen.

After the exposé and subsequent arrest of Bishop Daniel Obinim, Reverend Obofour, in a viral video, sent out a strong warning to Mr. Agyapong warning him to never try his exposé on him, else he Obofuor would make Agyapong useless and ridiculed.

It is unclear if the MP is chickening out, but the outspoken MP, who many thought would take on Rev. Obofour, said he will not engage the pastor in such a fight.

Speaking on Accra-based Net 2 TV recently, Agyapong said that he would not work according to the dictates of social media users who are calling on him to take up the challenge.

In a video sighted by GhanaWeb, the MP said, “I have not targeted any specific man of God. Let me say this: people, messages, social media, Obofour says this, Obofours says that, Ken Agyapong says he will do this and that to Obofour. It is not you social media that will dictate to me what to do, I am smarter than you think. You can say whatever you want to say, if you have not brought your issues to my doorstep, I will not fight you”.