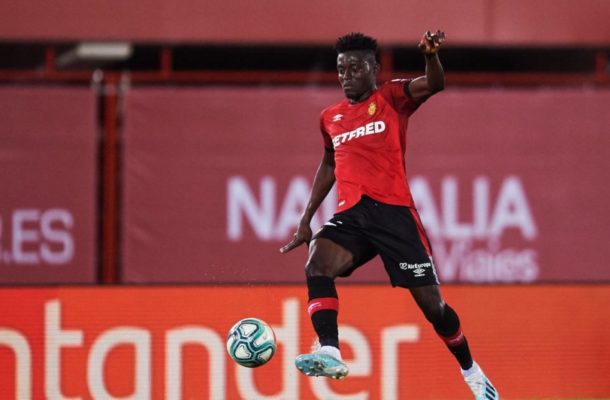 Ghanaian midfielder Baba Iddrisu started for his side Real Mallorca in their Spanish La Liga match on Sunday at the Estadi de Son Moix.

Idrissu BabaRodrigo was replaced in their draw game on the cusp of full time as he was taken off in the 90th minute for Andres Battaglia.

Hoppe entered the game in the 60th minute and scored for Real Mallorca but had his goal disallowed after a breakaway in the 82nd. He converted a cross by Joan Sastre into the net but the linesman ruled him offside. Video review confirmed the call.

Mallorca is back in the top flight after spending a year in the second division last season. It had won two of its first four matches, with a draw against Real Betis and a loss at Athletic Bilbao last week.

“We had our chances, but in the end we are happy with the point against a very difficult team like Villarreal,” veteran Mallorca goalkeeper Manolo Reina said.

Mallorca had won two of its last three league matches against Villarreal, whose winless streak to start the league reached four matches. Unai Emery’s team hasn’t won in six matches in all competitions this season. It was coming off a 2-2 home draw against Atalanta in the group stage of the Champions League, a competition it hadn’t played in for 10 years.

“They played tight on defense and kept us from playing our game,” Villarreal goalkeeper Gerónimo Rulli said. “We have to keep working hard.”

Coming off three straight victories, Real Madrid later visits a Valencia team that is off to a surprisingly good start with three wins and a draw. The league lead is up for grabs with both teams tied on 10 points, one behind Atlético Madrid, which was held by Athletic to a scoreless draw at home on Saturday.