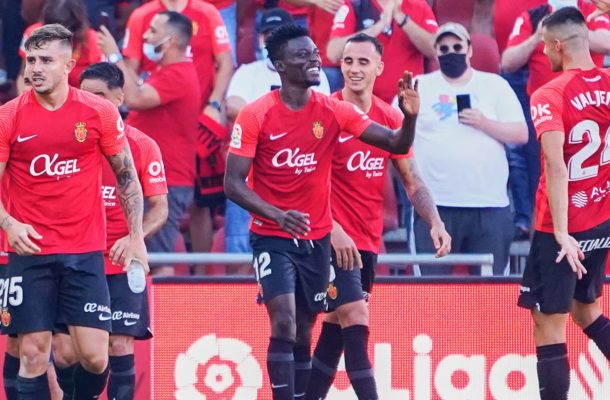 Ghana midfielder Iddrisu Baba was on target to help Real Mallorca claim a 1-1 away draw with Cadiz in La Liga on Sunday.

The 25-year-old’s goal ultimately proved crucial in saving his side from defeat in the matchday 12 fixture at Estadio Nuevo Mirandilla.

The result sees the Pirates hold the 12th position on the league table, while their matchday opposition occupy the 17th position, just one place above the relegation zone.

Baba’s strike comes almost a month after a post-match review panel discredited what he thought was his first career goal when his side faced Levante on matchday eight.

Against Cadiz, the 25-year-old opened the scoring in the 25th minute, slotting home from close range as a loose ball fell in his path in the box.

The visitors held their own and looked headed for a famous away win until the third minute of injury time when Mallorca conceded a penalty after Joan Sastre fouled Antony Lozano in the box.

Baba has been a key man for Mallorca this season, having featured in all 12 La Liga games played by the club so far, starting in all but two.

Against Levante, the Ghanaian thought he had scored his first goal for the club as the Pirates registered a 1-0 win, and did not hold back to express his delight before the goal was later credited to teammate Angel Luis.