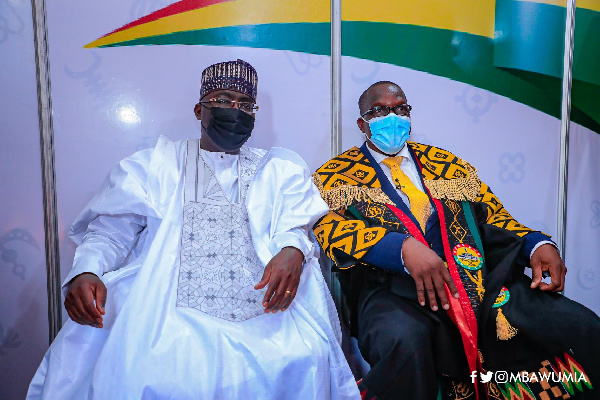 Speaker of Parliament, Alban Bagbin has disclosed that a Justice of the Supreme Court has explained why he is the second most powerful person in Ghana only behind the President of the Republic.

According to him, the unnamed Justice explained to a gathering that included Members of Parliament that to the extent that the governance structure comprised the Executive, Legislature and Judiciary in that order, their respective leaders must be ranked the same.

“When you start from His Excellency the President, you have to go to the Vice before you come to the Speaker and then you go to the Chief Justice,” he said of the known hierarchy.

Then continued: “But we have three arms of government… my colleagues in the Supreme Court told me that actually, you are not number three, you are number two. All those who were present at that meeting were convinced when the Supreme Court judge made the submission and justified it.

He reiterated a point about how underresourced Parliament and the Judiciary have been under the Fourth Republic, calling for greater engagement to ensure that their allocations are upped.

“I will insist and I expect to get the support of members, it is not this government right from 1993, Parliament, the Judiciary have never gotten 1% of the total revenue of the country, not even 1%.

“So I started the discussion from the highest, His Excellency the President and he was shocked when he saw the data, and my colleagues the Majority and Minority leaders are aware of this and we discussed how to transit from below 1% to about 5% within four years,” he added.

What the law says about presidential powers

In the first term of the Akufo-Addo government, Speaker Mike Oquaye acted as President in the absence of Akufo-Addo and Bawumia, almost a year since the second term started, there hasn’t arisen the need for Bagbin to be handed presidential powers.

On January 7, 2021, as the current Parliament convened to elect a speaker, his name popped up as the preferred candidate by the main opposition National Democratic Congress as against the candidature of the then outgoing speaker, Aaron Mike Oquaye, of the governing New Patriotic Party.

After a rancorous voting process which involved shouting and hurling of invectives by Members of Parliament-elect, kicking of voting booths and snatching of ballot papers, not to talk of a military invasion of the chamber, Alban Bagbin was elected speaker.

Whiles the NDC insists he won the vote outright, the NPP said he was a consensus candidate between the two sides of the house. The NPP agreed to play ball because they had a presidential inauguration to attend, which event the Minority had said they will boycott.