Incest, rape cause of teenage pregnancy in Central Tongu 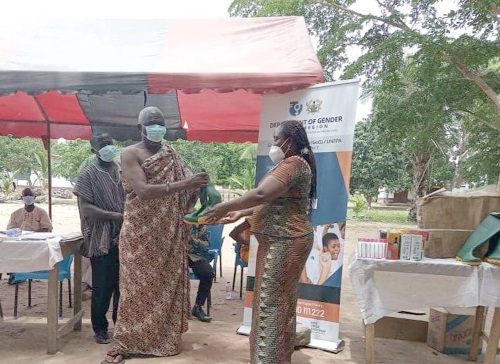 Incest and rape have been identified as contributory factors to high records of teenage pregnancies in the Central Tongu District.

The disturbing phenomenon festers in an environment of frosty parent-child relationships threatening the holistic development of adolescent girls in the district.

The issue came to light during a sensitisation session for community members organised by the Volta Regional Department of Gender at Mafi Dadoboe.

The matter was detailed by a Midwife and Acting Public Health Nurse for the Central Tongu District, Ms Agnes Nyarko, who described the situation as a burden on the district.

Records from the District Health Directorate for the first quarter of 2021 revealed that the district recorded 141 teenage pregnancies out of a total of 698 pregnancies registered, representing 20.2 per cent for the entire district.

The Adidome Sub-District out of the five sub-districts under the Central Tongu, however, took up a huge chunk of the number by recording 72 teenage pregnancies out of 365 registered pregnant women representing 19.8 per cent.

Ms Nyarko, speaking to the Daily Graphic on the sidelines of the programme, said the adolescent girls mostly confided in health workers and only pointed out the perpetrators when they were about to deliver their babies.

Stigma and its impact on health, including the effect of frequent caesarean sections, financial challenges, disruptions in education and skills training, were some of the debilitating factors which called for an urgent need to halt the phenomenon in the district.

She said there was an existing gap in parent-child communication, adding that teenagers were more open to communicating with health workers. She, therefore, appealed to parents to create a friendly environment, which would enable their adolescents to confide in them.

The point was supported by the Regional Head of the Department of Gender under the Ministry of Gender, Children and Social Protection, Mrs Thywill Eyra Kpe, who tasked parents to make efforts at strengthening their relationships with their adolescents and also ensure that they were well educated on sexual and reproductive issues.

To stem the current challenge, however, three communities in the Central Tongu District resolved to set up community watchdog committees who have initiated preventive supervisory roles.

The initiative, introduced to the Dadoboe, Wute and Tsawla communities since 2019, has contributed to a lower rate of teenage pregnancies in the impacted areas with Dadoboe, for instance, recording only three adolescent pregnancies in the first quarter of 2021.

Mrs Kpe said it was essential for members of the committees to be abreast of laws on sexual and gender-based violence and to ensure that they were not infringing on the rights of the adolescents they policed.

The Chief of Mafi Dadoboe, Togbe Akliku Ahorne II, explained that the seven-member watchdog committee in his community was formed in cognisance of the current trends of teenage pregnancies.

The chief said the committee had been successful in enforcing community regulations, including limited time at social events and a ban on late night outings for teenagers.

The Department of Gender later handed over some Torchlights, Wellington boots and Mosquito repellents to Togbe Ahorne II for onward distribution to the watchdog committee members.