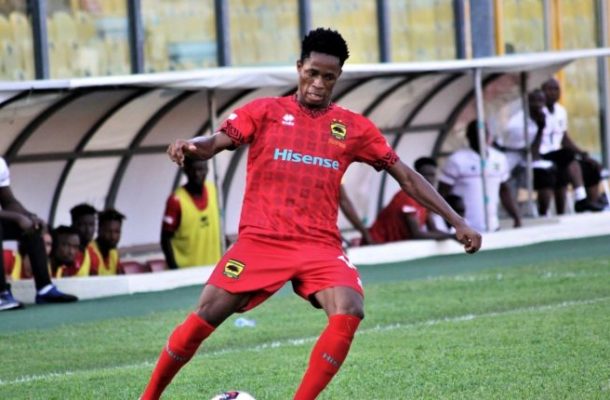 Head coach of Kumasi Asante Kotoko, Prosper Narteh Ogum has lauded the youngster Isaac Oppong for his contribution to the team after his latest showing against Techiman Eleven Wonders.

The Kotoko forward scored once more on Saturday night when his team faced Eleven Wonders in his side's 2-0 victory in their match day four clash at the Baba Yara Stadium.

Kotoko opened the scores in the 30th minute after Mudasiru Salifu nipped the ball off an Eleven Wonders defender after they tried playing the ball out from the back before he played in Samuel Boateng who arrowed a sot into the right bottom corner to make it 1-0.

Isaac Oppong who received a pass from the left flank beat his marker before curling into the roof of the net to make it 2-0 and his third goal for Kotoko.

Speaking after the game, the Kotoko gaffer heaped praises on the 18 year old forward who listens to instructions and is also talented.

"I think he is a fantastic player, he is talented and he work very hard too."

“So he is a blend of talent, hardwork and his ability to listen to tactical instructions on the field of play."

So I think this young guy is going to go far if he is able to keep his focus, keep his calm and keep his confidence.”

Kotoko will on match day 5 play against Karela United at the Anyinase Park.