'It could happen in Ghana again' - Ghanaian UBS rogue trader 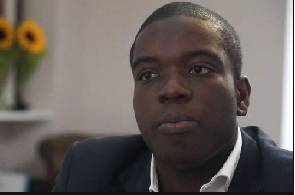 The London trader who lost the Swiss bank UBS £1.4bn ($1.9bn) has apologised and said that banking has not done enough to regain the public's trust.

In his first broadcast interview, Kweku Adoboli told the BBC that banking was still riven by conflicts of interest.

He added that traders were pushed to make profits "no matter what".

Asked if the crimes he committed - booking fictitious trades to cover up gambles in the hunt for profits - could happen again, he said: "Absolutely".

Adoboli - the biggest rogue trader in British history and described by the prosecution at his trial as a "master fraudster" and "sophisticated liar" - now faces deportation to Ghana, where he was born.

He said he is fighting the order as he is as "British in culture" as anyone living in the UK and could help the finance sector to reform by sharing his experiences.

After coming out of prison a year ago, 36-year-old Adoboli, who has lived in Britain since he was 12, said he had been prevented from taking paid work.

He is living with friends in Edinburgh and speaks for free at banking compliance conferences.

I asked him if behaviour in banking had changed since he was found guilty in 2012 of two counts of fraud and sentenced to seven years in prison. "No, certainly not," he answered.

"I think the young people I've spoken to, former colleagues I have spoken to, are still struggling with the same issues, the same conflicts, the same pressures to achieve no matter what.

"And this goes back to the structure of the industry. People are required to take risk to generate profit, because yields in the industry are consistently compressed.

"And if investment banks continue to chase the same level of profitably as they have in the past, the only way to generate those profits is to take more risk. "But from a politics angle, the desire is to limit that risk taking, to limit the profitability, but you have these conflicted goals.

"And where the conflict comes is where people fall into this grey zone, and so I think it can absolutely happen again.

"Especially as we go into what could be the next phase of the great financial crisis over the next 12 to 24 months."

Adoboli said that he was sorry for his actions, which at one stage had the potential to undermine the whole operation of UBS after his possible losses rose to over £8bn ($10.6bn).

His actions included setting up secret internal slush funds and booking fictitious deals to hide the amount of risk he was taking.

Multi-million pound bets on movements in the stock markets also failed to come off.

He claimed others at the bank knew of his actions and he was put under enormous pressure to make high levels of profit.

UBS has denied that anyone else knew what Adoboli was doing and no charges have been brought against any other UBS traders.

A number testified in court that Adoboli had been operating alone.

I asked him if he should apologise. "Absolutely," he said.
 
"I am devastated not for myself but for my institution and the people I have worked with.

"The very first thing I did when I was arrested was say I'm sorry beyond words and I said it through my lawyers, but that is what I said.

"During my trial I said it repeatedly.

"And these are not just devices. It's how I feel, I failed. I made mistakes. 'Is prison the answer?'

"People around me made mistakes too, but that's not the point.

"I unreservedly apologise for what happened - it was a huge failure and part of the redemption is about that.

"Part of rehabilitation is about facing up to your choices, what was wrong with them, and how do you move forward.

"The only way to move forward is to face it with full honesty.

"I went to prison for it. I was asked to pay a price, to accept my dishonesty.

"To accept that I was charged and found guilty of a criminal offence."

Adoboli is one of the few bankers to be jailed in the UK since the financial crisis.

I asked him if more people in the finance sector should face prison after fraudulent behaviour was found in a number of different markets including foreign exchange and the setting of inter-bank interest rates, known as Libor.

"It might help society to know people are being held to account but it doesn't solve the problems.

"This is why I say blame is not the answer.

"People do need to be held to account. I went to prison. I learned from it." 'Criminal label'

I asked Adoboli if he thought of himself as a criminal.

"I don't think of myself as a criminal," he answered.

"A lot of work has been done through my time in prison and with my friends and family to make sure I'm not left with this sense of - you are [only] a criminal.

"[Yes] you made a terrible mistake.

"You made a sequence of terrible choices, but your intentions were always in the right place.

"I accept I was found guilty of a crime that had dishonesty central to it."