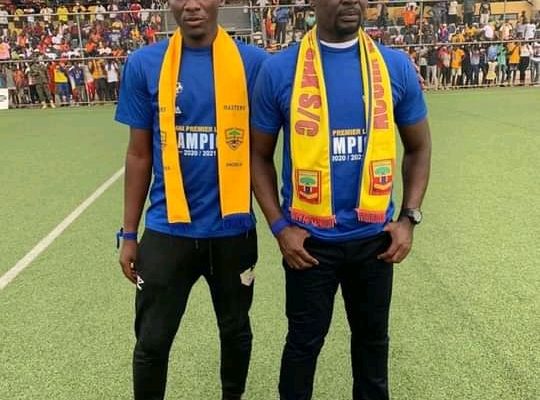 Legendary former player and General Manager of Asante Kotoko Samuel Opoku Nti has warned Accra Hearts of Oak not to make the greatest mistake by sacking their under fire coach Samuel Boadu.

The former Medeama gaffer took over the reigns of the Hearts coaching job midway through last season and guided them to break their trophy hoodoo as they won the Ghana Premier League title for the first time in 12 years and also won the MTN FA Cup.

Hearts of Oak are yet to win a match this season in the Ghana Premier League after four matches with three draws and a defeat against AshGold on Sunday.

Goals from Yaw Anor and Abdul Salam gave the miners all three points last Sunday in a game which Hearts of Oak could have won had they taken their chances in the first half.

There is pressure mounting on the young gaffer from a cross section of the fans although he still has a lot of credit in the bank for last year's titles.

Speaking in an interview with Kumasi based Akoma FM, the former Kotoko player has urged Hearts to be patient with Samuel Boadu.

“If a team goes to the [CAF] Champions League and unfortunately they couldn’t make it, sometimes it affects the players as individuals. I believe the whole fraternity of Hearts – the management and the technical team has to sit the boys down and talk to them."

"They should stay focused and forget what has happened and move on.”

The Ghanaian champions will play against Algerian side JS Soura in the playoff round at the Accra Sports Stadium on Sunday, November 28, 2021 before the return fixture in the North African country a week later.