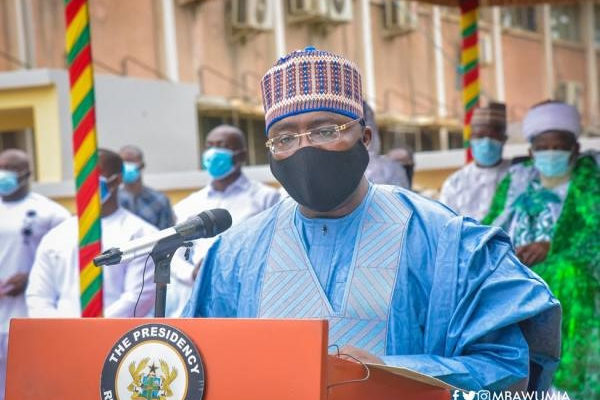 The Ashanti Regional Chief Imam, Sheikh Abdul Mumin Haroun has stated that the Muslim Community in Ghana would be most happy if one of their own, Alhaji Dr. Mahamudu Bawumia is elected by the New Patriotic Party (NPP) as their leader and eventually voted for as Ghana’s President.

The Chief Imam made this revelation when he spoke with Kwame Adinkrah on Kumasi-based Pure FM’s ‘Pure Morning Drive’ which was telecasted live on OneHD Tv and monitored by MyNewsGh.com.

There are reports in a section of the media that Vice President of the Republic of Ghana, Alhaji Dr. Mahamudu Bawumia is likely to succeed President Nana Addo Dankwa Akufo-Addo who is not eligible to contest for the presidency when his tenure expires in 2024.

In October last year when Dr Mahamudu Bawumia was put on the spotlight on Kumasi-based Pure FM with Kwame Adinkrah, he indicated that his only focus is to help President Akufo-Addo to succeed as the future remains in God’s hands.

“Adinkrah, my only job is to be Vice-President. As for the future, it is in God’s hands. It’s just my focus to help our President, Nana Addo Dankwa Akufo-Addo to succeed so we all benefit.” Dr. Bawumia responded when he was asked if he had plans on leading the country in the near future with all the experience, he has gathered in his political life should the need arise.

The late former General Secretary of the ruling New Patriotic Party(NPP) Kwadwo Owusu Afriyie aka Sir John in 2019  said apart from Vice President  Dr. Bawumia, any member of the party who has the ambition of becoming flagbearer after Akufo Addo’s 8-year reign should jettison that aspiration.

The Trade and Industry Minister, Alan Kyeremanten is tipped by political analysts to contest for the party’s flagbearer after Nana Akufo-Addo.

Alan Kyerematen is a man who has always competed against President Akufo-Addo for the NPP’s flagbearership. In 2008, 2012 and even in 2016 he contested against Nana Addo to become the presidential candidate of the NPP but lost on all occasions.

But Sir John, who is also the Chief Executive Officer of the Forestry Commission in an interview said the NPP will be doing itself great injustice if another person other than Dr. Bawumia takes over as the party’s flagbearer after President Akufo Addo.

“The NPP is from the Danquah-Busia-Dombo tradition, Danquah is having his turn at the Presidency being represented by President Akufo Addo, Busia has also had his turn represented by ex-President Kufuor, it is now left with Dombo, where is Dombo? He’ll be represented by Dr. Bawumia when he becomes President. Nobody will dare contest Dr. Bawumia after President Akufo Addo has ended his 8-year rule. There is no argument about this. If the NPP indeed believes in the Danquah-Busia-Dombo tradition, then that is the way. Look at how the humble S.D Dombo then leader of the Northern Peoples Party (NPP) handed over the leader of the opposition role in Parliament to Dr. Busia when our part only had two seats in Parliament. Dombo certainly needs to be represented and that will be done by Dr. Bawumia.”