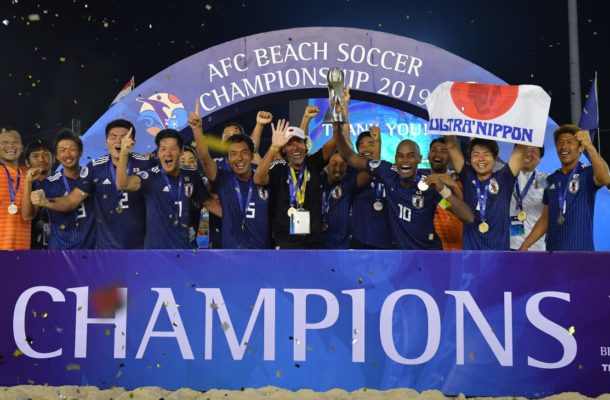 Pattaya: Japan emerged as the beach soccer kings of Asia, beating UAE 3-1 on penalties after a 2-2 draw in the AFC Beach Soccer Championship Thailand 2019 final on Sunday.


Takaaki Oba was the man who slammed home the winning penalty, after Masuyaki Komaki and Ozu Moreira scored Japan's goals during a gripping and high-quality decider.

UAE valiantly fought back from 2-0 down thanks to two goals in two minutes from Ali Mohammad, but the West Asians couldn't find a third, meaning the match was decided by spot-kicks.

Both sides will represent Asia at the FIFA Beach Soccer World Cup in Paraguay, along with Oman, who won the third place play-off earlier in the day.


Japan came into the final 48 hours after a commanding 6-0 semi-final win over Palestine, and they looked to pick up where they left off, with Ozu forcing Mohamed Al Bahri into a save after just 13 seconds.

The Emiratis responded - with Ahmed Beshr coming close with a bicycle kick, and Haitham Mohamed forcing a free-kick save by Shingo Terukina - but it was Japan who went into the break in front, with 36-year-old Komaki firing into the net after being cleverly supplied by Shusei Yamauchi.

Japan doubled their lead in the 16th minute, when the excellent Ozu made something out of nothing to score with a long-range volley that bounced beyond the reach of goalkeeper Humaid Jamal for his ninth goal, the most of any player, in the tournament..

With three minutes until the break, Ruy Ramos' side looked like taking a two-goal advantage into the final period, but UAE pulled one back in the 22nd minute when a wonderful driven assist from Waleed Beshr gave Mohammad a chance he could barely miss.

The UAE's two-minute turnaround was complete when Mohammad scored again in the final minute of the period, this time forcing the ball over the line after a goalmouth scramble that followed Humaid's crossbar-rattling effort from the other end of the pitch.

The West Asians started the deciding period the stronger, with Huamid forcing Terukina into a diving save with another long-range shot, and Beshr saw two efforts blocked in the following moments, before his desperate lunge turned the ball onto the upright with seven minutes remaining.

Humaid saved an Okuyama header, and Haitham Mohamed sent a difficult volley tantalisingly wide, but neither side produced the desired late heroics as the match, locked at 2-2, went to extra-time.

Neither side gave up on a winner, but despite the best efforts of Humaid - who hit the crossbar once more, then drew another Terukina save in the final seconds - the additional three minutes failed to provide a winner.

In a tense shootout, it was Ruy Ramos's side who prevailed, with Takaaki Oba slamming home the winning penalty just moments after UAE captain Walid Mohammad's costly miss to give Japan their third Asian title, and their first since the tournament came under the AFC umbrella in 2017.Source: the-afc.com