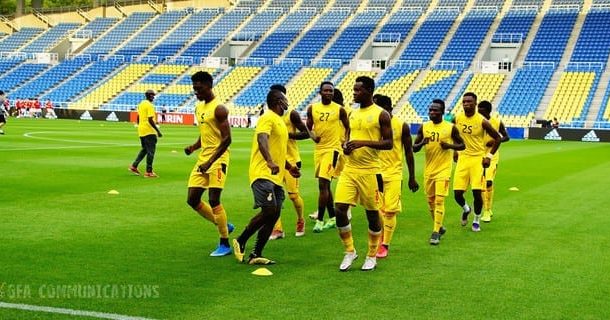 The Blue Samurai of Japan have handed the Black Meteors of Ghana a sound beating early Saturday morning at the Best Denki Stadium in Fukuoka.

Ghana lost by 6-0 in the early Saturday morning game which was a one sided contest and could even have been more.

The Japanese national team who are in the same group with South Africa in the men's Olympics football games are using the match as a practice game.

It was a game to forget for Ghana and Vision FC goalkeeper Willian Essu who had to pick the ball from his net six times in the game.

The home side started the game in dominant fashion and should have opened the scores after an error by Frank Assinki but they missed the chance.

It did not take long as the warning sign were clear before the Blue Samurai opened the scores after Doan Ritsu tucked home a rebound after a good save by the Ghana goalie.

Real Madrid midfielder Takefusa Kubo added the second goal for the host moments later with a beautiful curler beyond the reach of the Ghana goalie.

On the stroke of half time, Ghana compounded their misery as defender Frank Assinki who was a pale shadow of himself the who game turned the ball into his own net to make it 3-0 to Japan.

The home side returned with renewed hunger the second half as if they were trailing and it did not take long as they made their intentions clear.

Ueda Ayase headed home the fifth goals for the Blue Samurai after a well worked move before deep in stoppage timeMitoma Kaora added the sixth goal for Japan.

Before the game, the Black Meteors had a setback as the Ghana Premeir League top scorer Diawise Taylor tested positive for coronavirus and had to be kept in isolation.

The Black Meteors will face Japan once again on Wedenesday before traveling to South Korea to face them in a double header friendly.