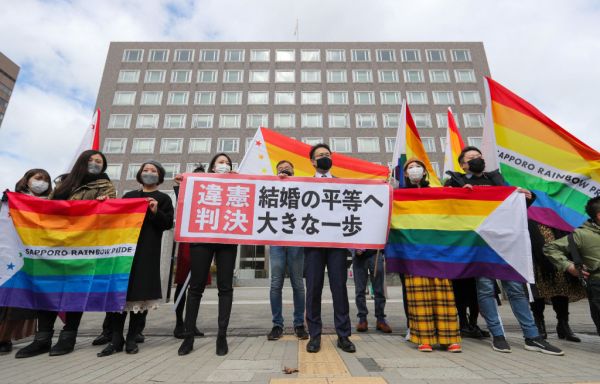 A district court in Japan has ruled that the country's failure to recognise same-sex marriage is "unconstitutional". Japan is the only country in the G7 group of developed nations that does not allow same-sex marriage.

The country's constitution defines marriage as one of "mutual consent between both sexes". But a Sapporo court ruled that this denied the couples constitutionally-guaranteed equality, in what is seen as a symbolic victory for LGBTQ activists.

The case was one of several cases brought to district courts in various parts of Japan by a group of same-sex couples who are seeking damages for mental suffering.

The Sapporo court rejected the compensation claim of one million yen ($9,000; £6,480) per person for being denied the same rights as heterosexual couples. But it found that not allowing them to marry was unconstitutional.

Ai Nakajima, who is among the group of plaintiffs, told the BBC: "This is one huge step forward in Japan... We are moving closer to making our dream come true."

However, there is still a long way to go. Even if all district courts declare same-sex unions constitutional, the legalisation of same-sex marriages is not guaranteed, as current political momentum to change the law is "lukewarm at best", according to The Japan Times.

Japan's constitution, put in place after the end of World War Two, defines marriage as one of "mutual consent between both sexes".

The court in Sapporo, the capital city of the northern Japanese island of Hokkaido, is the first to give its verdict, and its ruling is seen as having significant impact on the other courts.

Journalist and LGBTQ rights expert Yuji Kitamaru told the BBC the judgment was "well-crafted and very strategic" and laid "the first legal foundation against anti-LGBTQ theories".