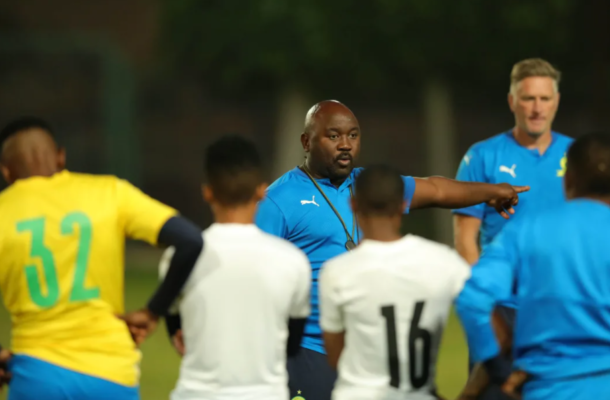 Leading the ladies of Mamelodi Sundowns to making history in the TotalEnergies CAF Women’s Champions League, Egypt 2021 with all the passion in the world, Jerry Tshabalala did not start as a women’s coach.

“I did not decide to switch to women’s football, it’s something that happened to me back in 2009. I was an assistant coach for a men’s team and got offered a head coach position for a women’s team, that’s how it started. I have passion for football, I don’t discriminate between women’s and men’s football as it’s the same for me,” Tshabalala told CAFOnline.com.

The relationship between Mamelodi Sundowns girls and their coach is unique. Tshabalala talked about what this team is to him. “This team means a lot to me. When I got the chance to work with them, I had so much faith in them and changed many things in the team. We started gradually to dominate South Africa. There are a lot of people who helped me build this team, I did not do it alone”.

“I’ve learnt a lot through football, specially since I started coaching women. Football has taught me to be honest, to be patient. In life, many things can go against your plans, and football taught me that there can be obstacles. Sometimes you win and sometimes you lose, you have to learn how to deal with both,” he added about what football added to his life.

Tshabalala does not want to stop here. “After the tournament, I want to invest more in myself. I have not invested enough in myself, and I have to put more work into that. I want to be coaching one of the women’s national teams in three or four years. But not right now, as I do not think I’m ready for this yet. I have to work on myself first”.

Regarding the WCL he declared “Being here in the final, is not about me, it’s more about the team. I tell my players that in each tournament we play, we have to do our absolute best, regardless of what happens next. We just write history as we go. I know our names will always be in history books”.

He had a message to deliver. “To all the girls, especially African girls, the future of women’s football is bright. If you respect football, football respects you back”.

“I want to applaud the Egyptian people; we received a huge support here and I thank them very much. The humanity they show to everyone here is inspiring, and we will take it back with us to South Africa” he concluded.