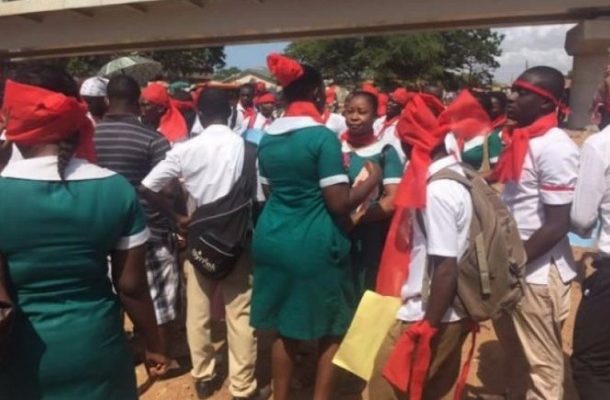 The National Executive Board (NEB) of the Ghana Nurses-Midwives Trainees Association (GNMTA), has issued an ultimatum to government till the end of August to meet address their concerns.

The group indicated that government is to meet the August ending deadline of given financial clearance to some 27,000 members of the association or risk being hit by massive demonstration dubbed the ‘One Million Walk’.

According to the leadership of GNMTA, they have had a series of stakeholder engagements and have equally made numerous follow-ups to the Ministry of Health to enquire about their financial clearance since 2017 but to no avail, resulting in a peaceful street procession and pickets due to unfulfilled promises.GNMTA, in a statement, said they were assured of financial clearance, since the government planned recruiting over 27,000 nurses and midwives in the 2018 budget.According to them, the Minister of Health, Kwaku Agyeman-Manu, gave the assurance and stated that the clearance would be ready by mid-July but “we are in August and nothing credible and tangible has happened”.“What is preventing the government of the day from releasing financial clearance for the employment of these nurses and midwives if actually they have been budgeted for?” GNMTA quizzed.The group has called on President Nana Addo Dankwa Akufo-Addo to intervene and get them employed by the end of August or they will hit the streets.“As part of this demonstration, we are calling on our parents, trainee nurses and midwives, rotation nurses and all graduate unemployment nurses and midwives (GRNMA), national, regional and district executives, our senior colleagues (staff, nurses and midwives), sympathisers, opinion leaders and members of the general public to join us in this massive demonstration to register our displeasure as unemployed nurses and midwives to the government due to the manner in which they have pitifully handled the unemployment issues of graduate nurses and midwives, which, in the end, will have adverse effect on society at large,” the statement said.It added that: “Secondly, we shall embark on what we call, ‘One Million Walk’ through the principal streets of the capital, Accra, to the Jubilee House. The group will come out with this One Million Walk to inform the government that since they are not ready to post us, we shall definitely advise ourselves when the right time comes because the false pretence has gotten to its peak and we can no longer bear it.”