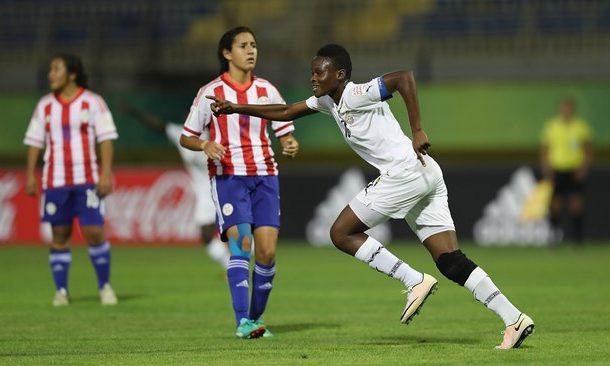 Skipper Sandra Owusu-Ansah scored a stunning winner, as Ghana qualified for the quarter-finals of the FIFA U-17 Women's World Cup with a 1-0 victory over Paraguay.

The Black Maidens, who will now face Korea DPR in the last eight, had to work hard for the result but, despite not being at the best, were undoubtedly worthy winners.

Having seen off USA so impressively, Evans Adotey's side had been expected to make light work of a Paraguay side soundly beaten in each of their previous fixtures. But the South Americans were clearly determined to be more resolute in this, their final Jordan 2016 outing, and kept their African opponents at bay throughout a frustrating first half.

Debutante keeper Andrea Beckenstein also played her part, saving well from an Owusu-Ansah header and then parrying a close-range effort from Blessing Agbomadzi, with Gifty Acheampong unable to convert the rebound.

Ghana remained on top and continued to dominate the Paraguayans physically, but the second half initially brought only more frustration in front of goal. Twice, they were clean through but on both occasions - first through Rafia Kulchirie, then Owusu-Ansah - they failed to find the target.

The Ghanaian captain would not be denied, though, and with 22 minutes remaining, she conjured up a spectacular clincher. Acheampong cushioned the ball into her path 25 yards from goal and Owusu-Ansah took it first time on the volley, sending a right-foot shot looping into the top right-hand corner.