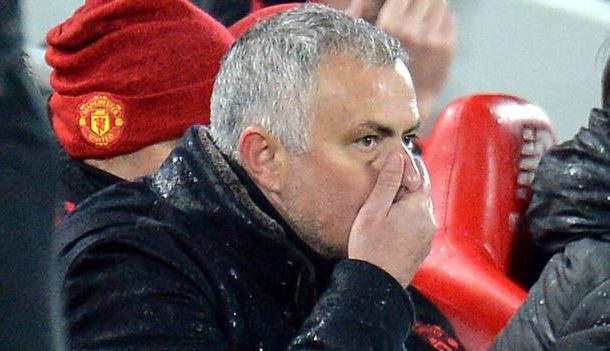 Jose Mourinho says Manchester United can still finish fourth despite falling further behind the Premier League's pacesetters with defeat at Liverpool on Sunday.
United now sit sixth after 17 games, 11 points adrift of Chelsea in fourth and 19 behind leaders Liverpool.
"[Can we] win the title? Of course not. But we can still finish fourth," Mourinho told Sky Sports.

"It's not easy but for sure we are going to finish in the top six."

As it happened: Liverpool 3-1 Manchester United.

Shaqiri the star man - how the players rated.
The big questions after United's loss at Liverpool.
'Hard to see him at United next season' - Phil McNulty on Mourinho's future.

Xherdan Shaqiri's late double consigned United to their fifth league loss of the campaign, which means they have taken just 26 points from 17 games.
That is their worst points total at this stage of a top-flight season since 1990-91.

If you are viewing this page on the BBC News app please click here to vote.

"The strongest team won, but they won in the period when they were not stronger than us," Mourinho said of the match.
"In the first 20 minutes we could not breathe, the pressure was so intense. I am still tired looking at Andrew Robertson.
"In first 20 minutes there was a huge distance [between the teams]. They were better and stronger, they did everything better than us.
"But we managed to balance the game at 1-1. The second and third goals are hard. We lost the game with two rebounds."
The three goals conceded at Anfield mean United have now conceded 29 in the Premier League this season, one more than they did in the entirety of 2017-18.
It is also the most goals they have let in at this stage of a top-flight campaign since 1962-63.
The Portuguese had to make a late alteration to his starting line-up at Anfield when Chris Smalling, who signed a new long-term deal on Saturday, withdrew through injury and was replaced by Eric Bailly.
Meanwhile, Paul Pogba was an unused substitute, while Marouane Fellaini was introduced at half-time as Mourinho searched for inspiration.
But Mourinho brushed off claims his players 'weren't playing for him' when questioned in a post-match interview.
He said: "Are you calling the players dishonest? I believe they are honest. You believe they are dishonest. Players give maximum every day, every minute. If the players don't do the maximum then you call them dishonest.
"The players on the pitch gave everything. We can't compare the intensity and physicality of Liverpool. In spite of that we were in the game until we conceded the third goal."Source: bbc.com