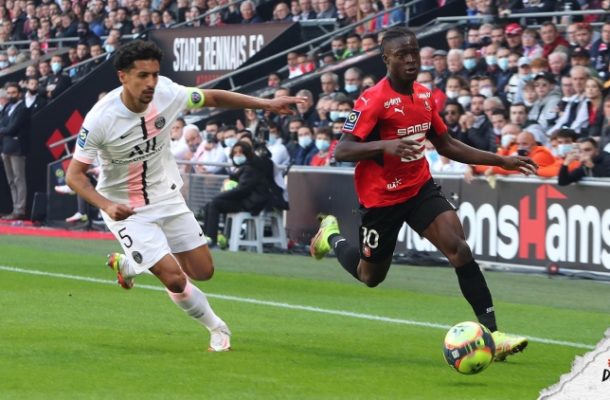 Ghanaian forward Kamaldeen Sulemana was integral as his Stade Rennes side defeated moneybags Paris Saint Germain at the Roahzon Park on Sunday.

The talented winger has expressed his happiness after his side caused a shock with their win against PSG over the weekend.

After the break, Rennes doubled their lead through Flavien Tait who delivered right footed shot from the centre of the box to the bottom left corner.

An excited Kamaldeen Sulemana took to his Twitter handle to express his delight after helping his team chalk a historic feat.

"An unforgettable night at Roahzon park . Feels amazing to be a part of such historic night & be able to leave a mark. Thanks for the support from Roahzon, all Ghanaians & beyond The mugushow continues," he wrote on Twitter.

He has so far scored three goals while providing one assists so far in nine matches in the French Ligue 1 this season after joining from FC Nordsjaelland.